It’s 02.00am on the day of the race and I’m on the Wirral at my brother’s 50th birthday party. The drinks are flowing and a friend is singing and playing the guitar with the karaoke machine in the corner. I’m dancing doing the twist where your bum touches your ankles, wondering am I going to regret this later with still having an injury.

I’m looking all over the tables at the food which contains food from the 4 corners of the world and wanting something I can digest easily and play it safe with sandwiches. The birthday cake is brought out, I do a quick time check and its 02.30am. We all sing happy birthday, my sister comes over and says you’re running later at what time? I say 09.00, she thinks it starts at 10.00, within 10 minutes we’re driving through the Mersey tunnel to her place around 2 miles from the start line with a car full of birthday cake. I thought to myself, it’s not the best preparation for a run but I’ve had a good laugh with my family, so what the hell.

Well, any excuse to get back over to Liverpool, be it to see family, football or even go for a run. But wait, some Striders have a history with the course, many had a nightmare doing the half and full marathons last May. I even ended up getting a free ride in an ambulance, we ran in 70-odd degrees that day. Could the weather play a part again?

I got up at 07.00, checked the forecast and it predicted rain, sleet, hailstones and strong winds. Result I thought, not 70+ degree heat. I looked out of the bedroom window and the weather looked OK.

The wife, sister, daughter and granddaughter would be at the finish line so that gave me a boost. I got to the start at 08.45, buses were lined up for people to get changed in and leave your kit. You could also use the free changing rooms and showers at The Gym across the road.

I stood between the 1.40 and 1.50 pacers. It was cold, it was wet, it was windy. A fella stood next to me shivering from head to toe, I felt like saying ‘You need to put something else on mate’, he had goose pimples like the Himalayas.

Liverpool were playing at home, the starter must have been a blue and welcomed all of the Norwegians to Liverpool. The start was just across from the Liver buildings, a gun went off, all the Scousers dived for cover, then we realised it was the start of the race so we all crawled back from the under the cars and started to run.

The course is flat apart from a sharp incline at 1 mile. I was tired, in some pain and regretting eating cake and other rubbish earlier on. Straightaway, I got talking to some Sheffield youngsters who were studying at Liverpool Uni, it was great telling them about the city of Liverpool. I knew I was going slower than I did in Leicestershire, but I wasn’t too bothered, I was in my own city with my family at the finish line..what could go wrong?

They had musicians on sections of the course which was a nice touch. Running towards Sefton Park, kids were handing out jelly babies. I normally wait until I’m in the posh areas  before I start taking them then you know they are more likely to be from Marks and Sparks and not Lidl or Aldi!! Similar to Sheffield, you wait until you’re at the end of Ecclesall Road.

I made steady progress through Sefton Park, then turned a sharp right onto Otterspool Prom, this was at the 9 mile mark. I was feeling good. Within seconds of getting on to the Prom, I was hit by the wind, well it was more than just wind, I’ve not experienced anything like it whilst I’ve been running before. I find this the worst weather to cycle in and running in it isn’t much better. The wind was straight at your face, almost pushing you backwards to a standstill. I hadn’t seen another Strider all day, a few miles to go somebody behind me said ‘Hi Tony’ I recognised the face but couldn’t remember his name. I found out later it was Tom Brooks. We ran together for a short while, mainly talking about how s**t the weather had been. Two miles from the finish, you run over a small bridge, the wind blew me from left to right and I was blown right over to one of race officials who put their arms out to stop me blowing into them.

During the 4 miles, I can only remember 10 seconds of where it was calm, the stillness was incredible, you could have heard a pin drop. I crossed the finish line in 1.44 something, got a lovely medal and t-shirt and I was greeted by my family.

We had a coffee, got changed, visited other family members, then drove back to Sheffield to go to Jill’s charity do at Bradfield Road Club, I won a bottle of wine.

What I realise today is that I won’t be able to run in May unless I sort my injury out. I’d had little sleep, lots of pain, crap weather, would I do it again? Yes, in a heartbeat!! 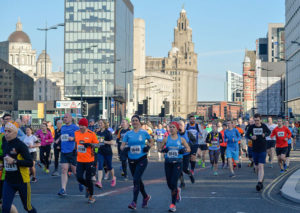