Run For It is a Sheffield-based organisation which arranges fun running/walking events throughout the year. These events usually take place on the fast and flat canal towpath near Meadowhall, and include a trip beneath the Tinsley Viaduct. These events are not UKA or otherwise accredited, and part of the joy of this is that they are for everyone of all abilities and ages (more on that later), and raise money for charity to boot.

This year’s Santa Dash had the option of two distances (5km and 10km) and two starting times – 11:00am and 2:00pm. Normally the 10k would take runners all the way to the New York Stadium in Rotherham, but on this particular occasion Rotherham United were playing at home, and so for safety the 10k was two laps of the 5k route. All participants were issued with a fantastic personalised t-shirt and Santa hat at the start of the event.

This event has been a pre-Christmas staple for my family for the past few years. My son and husband usually run the 5k, and my daughter, who has never really been a runner, has always chosen a steadier run/walk, which is not only accepted at Run For It events, but is positively encouraged. Whilst this event is very much marketed as a fun run, there are a significant number of faster runners who take part, and this year there was a good smattering of Striders among the 500 or so participants.

This year we opted to take part in the 5k, 11:00am iteration. It was particularly poignant for us that we were still able to take part in this as a family, as earlier in the year my then 16-year old daughter Olivia began to struggle with her mobility. She had several falls and now has to rely on crutches to get around (at one stage she needed a wheelchair in certain circumstances). Olivia was finally diagnosed with a condition called Chronic Inflammatory Demyelinating Polyneuropathy (CIDP for short), a rare and cruel neurological condition, which has impacted on all our lives. However, because Mel and Darren from Run For It are so supportive of people of all abilities, she was made to feel completely welcome. She walked the 5k in 1:08:54 unaided (apart from her crutches) which was a fantastic achievement (at the opposite end of the spectrum her brother Isaac came 4th in 21:14!).

The 11:00am 5k event was won by our very own Simon Ross in 19:54, and he was the first to be able to enjoy the bespoke wooden medal, bubbly and mince pies which were handed out at the end. I’m not sure if Simon took the opportunity to sit on Santa’s knee in his specially inflated grotto? There was something very familiar about him – I believe the motif on his personalised t-shirt might have a been a Gold Star…

There was lots of media coverage of the event, including some great photos in the Sheffield Star: https://www.thestar.co.uk/news/people/santas-dash-around-sheffield-canal-towpath-annual-charity-event-pictures-1348727 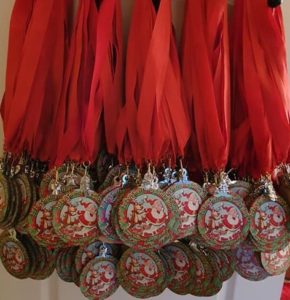