All work and no play as they say so, with spring marathons now firmly a thing of the dim and distant past, we had another break from the usual Tuesday diet of long reps or hills with an outing to the Dorothy Hyman Stadium in Barnsley. In the 60’s Dorothy was the Queen of British sprinting with an imperious record. Read about her story here with this link to the UK Athletics website: Dorothy Hyman: UKA Hall of Fame The reference to the Polish athlete and the now discredited chromosome test is especially pertinent in light of the current discussions surrounding Caster Semenya. 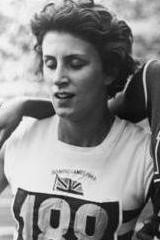 Back to Cudworth on a blustery Wednesday evening and our own Queen of the Fells, Caroline Brock, was planning to beat Jennifer Rich’s club 5km track record of 18:52.7. Demonstrating her versality, she provided a perfectly executed example of metronome pacing, lapping constantly at 90 seconds to cross the line in 18.43.3. For the boys it was a different story with James Fulcher acting as pacemaker until the last 400m when Matt Connell said thank you very much and decided that it was time to say “ta ta”.

There was also a B race with 13 competitors.

Results are on Power of Ten thanks to Keith Binney and his team of top class officials. We’re keeping our numbers for Barnsley AC’s next open meeting in July.