‘See this one here? Noel Edmonds came to view that. But he didn’t buy it because he couldn’t get planning permission for a helipad.’

My old friend John, an Ackworthian of several years, was delighting in pointing out the high-end properties of his adoptive hometown as we walked (or hobbled, in my case) back to the car following this year’s Ackworth half marathon. The other highlight of the brief tour undertaken en route from John’s house to the start line was Lawnmower Planet, housed in what looked like a converted Methodist chapel, and where he’d recently had his Flymo serviced (which is not a local euphemism).The previous day, a vintage tractor rally had taken place on the same stubbly, gently-sloping field as today’s start and finish, and a few remaining tractorists sat around on deck chairs, drawing out the final few hours of the bank holiday weekend, muttering under their breaths about nutcases who’d want to be charging around on a day like this. It was all a little bit Royston Vasey. I could imagine Noel fitting in seamlessly.

Around a quarter of an hour earlier, I’d just about managed to dig out a sprint finish for the gathered multitudes (well, John, Mrs C, the kids and an enthusiastic but largely unintelligible compere) in order to avoid being overtaken by the Vegan Runner in tenth position; his diet of mung beans and tofu, I reflected as the interval between the applause for his efforts and my own was being steadily eaten away over the last couple of miles, could surely not be powering him to an 85 minute half…. As the town’s skyline-hogging water tower reared its head like a prop from a low-budget 1960s sci-fi series, I took stock, through a rapidly-thickening fug of exhaustion, of what had been a tougher challenge than I’d been expecting.

Last year’s event kicked off, I’m told, in snowfall, and the course was correspondingly soggy. But nippier conditions often lead to faster times, and the event was won in a course record-breaking 1:10:39. This year, runners were faced with the polar opposite. Temperatures of twenty degrees were forecast by the end of the race, and so PBs – never mind records – didn’t look to be on the cards. Deciding (foolishly, it turned out when skimming through the race photos a couple of days later) that John was correct in asserting that wrap-around shades wouldn’t make me look a prick, I made my way to the start line, and at race o’clock, which the non-running community commonly refer to as half past nine, we were underway.

A 5:40 first mile came and went before I’d glanced at my watch, during which I managed a silly wave for my legion-of-fans-cum-long-suffering-family, and appreciated the well-meant but woefully out-of-place clang of an Alpine cowbell. A gentle alarm – let’s say, the equivalent of the Radio 3 breakfast show – should probably have been ringing at the sight of a sub-6 minute first mile on a day when forgetting to slap on the sun cream could be considered an error in tactical judgement, but I was enjoying the undulating country roads, the unfolding farmland, and the views to distant copses shrouded in the kind of mist that burns away to reveal barbeque weather. I settled into a rhythm and aimed to maintain six-minute mile pace for as long as possible. Someone had mentioned ‘a bit of a hill’ around mile four or five, so I figured I’d given myself a cushion, a window of grace.

When the incline finally began to kick in, I got my head down, kept the runner ahead in my sights, and crested the hill to rapturous indifference from the smattering of locals who’d wandered outside to see what all the fuss was about. A well-to-do lady stood at the end of her immaculately paved driveway, her face expressing a doggy-bag of emotions ranging from weary resignation through to discomfort at the proximity of sweaty people. The road started to wend its way downhill into the Midsomer Murders-esque village of Wentbridge. Approaching the drinks station, ably staffed by what was perhaps the local WI, the familiar strains of ‘Running up that Hill’ reached my ears, booming from the stereo of a strategically-placed four-by-four. I suppose I should’ve put two and two together at that point – but, I reasoned, I’d just done the hill, so maybe it was a coincidence. Discarding my plastic cup having drunk about three per-cent of the contents (drinking from a cup at speed, I reflected, should be an Olympic event given the technical skill involved), and then fearing the wrath of The Colonel or some other such local luminary (‘bloody hippies, hurling their litter around willy-nilly….’), I rounded the bend…..

…..Now don’t get me wrong – I run around Sheffield, I’m used to hills – but I like to know where they are and when they’re coming up. It upsets me when I’m not expecting a hill, and I definitely wasn’t expecting this one. To be fair, it took the form of a lovely tree-lined lane, cut deep into the rock so that we experienced the balm of prolonged shade for the first time that morning – but it didn’t half pull the rug out from under me, so to speak. Suffice to say, by the time the road levelled out, bringing with it an up-close-and-personal and rather unwelcome view of the A1, I was no longer averaging 6-minute mile pace. (Ironically, another marshal vehicle stationed at this point was also blaring out the Kate Bush classic – but I decided not to stop and offer my suggestions for a more appropriate top-of-the-hill anthem.)

Leaving the A1 behind, we returned to the kind of country lanes that grace the cover of a Norfolk OS map – roads on which retired couples on bikes get happily lost before settling down on the grass verge to crack open their flask of tea. We wound back around into Wentbridge, re-joining the route we’d taken on the way out. A family on bikes shouted encouragement as they took advantage of the downhill which had now become, for me, an increasingly leaden-legged slog. Passing the ten mile marker, I knew that a PB was off the cards, but the incentive of a top-ten finish still dangled like the metaphorical carrot. The quaintness of the houses, the hobbit-like homeliness of the blossom-strewn gardens, – these things began to irritate me by virtue of them not being the finish line. A saintly couple with a bucket of wet flannels and a hosepipe appeared to me as might a pair of irritating street vendors in an exotic marketplace, such was my desperation to finish. By this point, I knew I was being chased down by the Vegan, and who knew how many others; I had to preserve that top-ten status. But the hills just kept coming. It was like being trapped in one of those optical illusion rooms where the floor seems to be sloping; surely, I thought, I must be heading downhill by now? When the ‘400 metres to go’ sign appeared, somewhere atop yet another incline, I dug in for one last push. And, just like that, I was over the line. A load of fuss about nothing (which is easy to say when you’re sitting in your conservatory with a bottle of Jaipur).

And so, when the helpful volunteer at the finish asked me, while removing the timing tag from my laces, if I was ‘doing London’ next weekend, I took great delight in telling her that London could cuckoo, for all I cared. As my kids devoured fellow-Strider (and M50 category winner) Nick Booker’s complimentary Twirl, having not eaten any chocolate for at least seven minutes, I looked around for a spare patch of grass, and went, in a spirit of grudging sportsmanship, to sit next to the guy who’d finished a place ahead of me, who’d overtaken me just after The Hill.

‘I wouldn’t sit there mate,’ he said as I made to sit down and generate a little post-race camaraderie. ‘I’ve just been a bit sick.’ I made my excuses and walked away to pick up my t-shirt (it turned out, in what struck me as an uncharacteristically tight-fisted decision, that I hadn’t ordered one), a small part of me thinking, that’ll teach you for snatching my eighth place. By this time, a – what’s the collective noun for a group of Striders? – had assembled at the finish line, and in the spirit of actually reporting some useful information, and celebrating some excellent individual achievements, their race details are as follows:

The race was won by Stewart Knowles of Wakefield District AC in 1:17:42. The women’s race was won by Johanna Sutcliffe of Halifax Harriers in 1:27:01. Full results are available here. 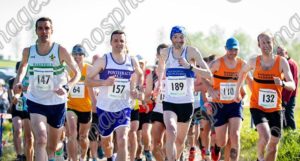