On 27th July, I ran this marathon in the beautiful Afan Forest near Port Talbot in South Wales. This is used by walkers and mountain bikers because of its quality graded trails and beautiful scenery. It has an industrial past as a coal mining area but since 1972 has been designated a forest park.

There were fewer than 70 runners on the day. Parking was provided (£5 – I did think this was quite pricey) and registration was a simple affair. Stalls were on hand selling cakes (for a donation to charity) and Tough Runner merchandise. The briefing started about 9.50 and was thorough. I loved the bit where she told some guys chatting to be quiet and listen – “sorry, that is the teacher in me,” she explained.

The majority of runners were extremely fast, and I didn’t see the majority of them again until the end. In fact, I was running on my own most of the time. The marathon included over 4000 feet of climbing. The trails were very runnable, consisting mostly of broad stony tracks but included a few narrow paths too. Aid stations numbered about five, evenly spaced throughout the run. They had bottled water, gels and later, isotonic drink too.

I found myself still feeling tired after a 76 km ultra I had done two weeks previously. It was warm and I was drinking a lot. I drank about three litres of fluid on the run alone and used several gels too. I am going to try tailwind in the next few weeks because I feel that because I sweat so much in the heat, I am not properly replacing everything that I need, leaving me tired and exhausted and unable to run much at the end of every marathon or longer distance that I have done this summer. With about two miles to go to the finish was a short but steep section followed by a long climb and long descent. But I was so exhausted that I could only manage a trot on the final downhill section. 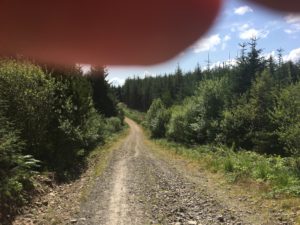 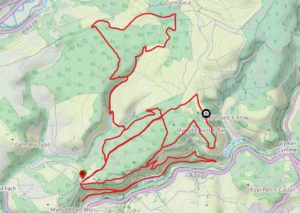