This wonderful race / run was the final event of 2 years taking in  94 events that our very own Adam Newell was taking part in to complete 2 years ~Nasser94.

A truly inspirational series of events the family has taken part in to mark the passing of their grandad.

I know Adam will be sending in his own report but I have extracted a little bit of background form the donation page:

We unfortunately lost our Grandad in 2017, one half of the best grandparents around. Both were so influential in our families lives and their absence will be felt continuously. Grandad began dealing with dementia about 8 years ago and those were tough years seeing him cope with it up until his 94th year where he passed.

As a family we decided to fund raise in his honour and found it fitting to partake/organise 94 events, one for each year of his life.

We are raising money for The Alzheimer’s Society and would welcome donations and support.

These 94 events will take place in the next two years and a list of them will appear on here, Facebook and other social media platforms.

Moving onto the race/ run itself is a description taken from the web page which doesn’t even do the event itself justice really on what turned out to be a pretty dry morning so the choice of footwear between road or train didn’t need any discussion really though my own preference of road from my own Imelda Marcos range of running shoes did cause me a little concern.

This 5-mile multi-terrain fundraising run takes in the great views of Agden Reservoir, near the picturesque village of Bradfield, Sheffield.

Starting outside Bradfield Parish Village Cricket Club this two-lap race begins with the AAA Windy Bank Climb Strava Segment. This 1km segment with 154ft climb is sure to get your heart rate going. Will you be King or Queen of the Mountain?

The route then goes off road around the Agden Reservoir footpath before returning to the road for a nice descent back to the Cricket Club to start your second lap.

Around 50 Striders took part out of a field of approx. 147. The  event was given a nice little twist with a chaser involved Strider  Liam Walker starting with a an handicap of 9.40 minutes after the main pack to see how many of the field he could overtake with people donating 10p for every person he overtook. Anyone who knows Liam will know he is more of a drama queen than myself so in true style he actually over took 106 people (an amazing effort) however, he would actually have overtaken 126 if he hadn’t taken a wrong turning up windy bank and gone wrong for 1.2 km (oops) though it was been pointed out to him by yours truly that perhaps a course recce might have assisted – just saying.

So much love and positive feedback that from everyone who took part that we hope this will become a regular feature on the trail series championships in the future. It is a challenging course but everyone finished with smiles and said they would definitely do the run again.  It just typifies the true ethos of what the Striders club is all about all-inclusive and for everyone no matter of age or ability, supporting each other whether a member of Steel City Striders or other clubs.

The male winner was Michael Harrison of Kimberworth Striders 35.01 and the first female was Caz Kay 39.28. 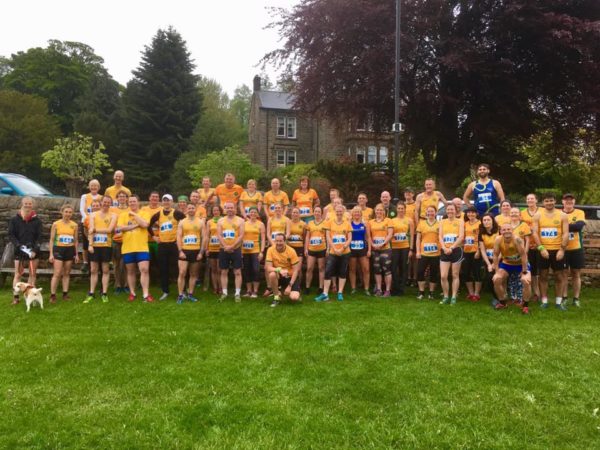