The Isle of Axholme Half Marathon, 2019

If I’m honest I had very little idea of where the Isle of Axholme was prior to last Sunday. I’d established it was somewhere in Lincolnshire, but it’s a big county, as those of us who travelled to the Bassingham Bash in August discovered. Anyhow, it turned out to be reassuringly close; in fact it’s the only part of Lincolnshire west of the River Trent, less than an hour from Sheffield.

As we drove there on Sunday morning, having rejected the travel scrabble based entertainment on offer on the Striders bus, much of the pre-race chat seemed to revolve around the fact that the course was flat and definitely had PB potential; comparisons were made to the North Lincs half, where all four of us in the car had secured PBs at one time or another.

We arrived in Epworth, the Isle of Axholme’s principle town and the location of the start and finish, to be greeted by plenty of Striders. With the race making up the penultimate fixture in this year’s Road League, this was hardly surprising. I spent most of the pre-race trying to calculate how many other Division Three runners were present, on a day when plenty of club members were running at York. As we massed at the start line, it was apparent that Striders were about a quarter of the total field of 233. Conditions seemed perfect in the centre of town; cool, dry and even intermittent sunshine. Perhaps that PB might be on the cards?

The first six kilometres seemed very encouraging; I was running at about 4.20 minute/km pace and was feeling strong. However, I didn’t notice that I’d been running with the wind behind me for this first part of the race and that conditions were about to change. As we reached Owston Ferry and turned to head north along the Trent, a stiff breeze that would continue for the next ten kilometres made itself known. Every glance at the watch confirmed that slowly the breeze was winning, and my pace was drifting. Only once we reached Beltoft, at around 17km, did the wind finally abate, but by that point I knew I’d have to settle for a time over 1.35.

Most finishers seemed to have had a similar experience, with the wind costing them a couple of minutes against the time they’d hoped for. Nonetheless there were still some Striders’ PBs in the mix, and plenty of folk picked up valuable Road League points. This, the ninth running of the event was well organised, well marshalled and reasonably priced. It definitely has PB potential, but I’d check the weather forecast carefully – there really is nowhere to hide in those expansive Lincolnshire landscapes.

Sadly, I didn’t have time to check out Epworth’s other delights; the rectory that was once home to Methodist theologian, John Wesley or even Europe’s largest (only?) trolley bus museum. Perhaps I’ll run it again next year.

The first male finisher was our own Joe Sweetnam-Powell in a time of 1.14.25, whilst fellow-Strider Phil Skelton came in third in 1.15.46. This should make for an exciting finish to the Road League season at Doncaster, provided both of them can secure a place. Nicola Curtis of Scunthorpe and District AC was the first female in a time of 1.26.47.

There were also good performances from Lucy Broom, Sarah Allcard and Tracey Davies – first, second and third F45 finishers, Richard Pegg and Stephanie Hanson, both first in V60 and F60 and Nicole Nield, first F65. The meteoric rise of Rob Betts also continues; he achieved a commendable third in V50 and took his old PB apart in the process.

The full results are here and the 48(!) Strider results: 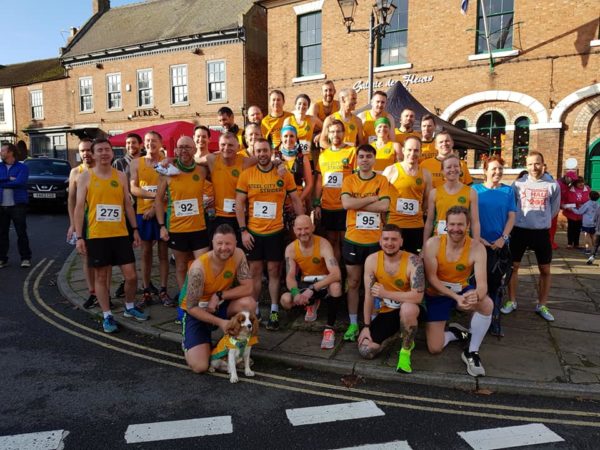 Some of the happy campers….