On a hot and humid Sunday a handful of the gold and green made their way over to Hull for the 10k and half marathon. As part of the Jane Tomlinson Run for all series, the event was pretty well organised, with plenty of facilities available.

By the time I arrived the half marathon was already underway (an 8:45 start time for those early birds) and runners were just starting to gather for the 9:45 start of the 10k. A couple of presenters from Viking FM did their bit to get the 3000+ entertained but I think the vast majority were just trying their best to stay cool.

Gathering on the start line there were a couple of Striders prominently placed in the first couple of rows hoping for a good start. And so it was, under a dull sky but with temperatures soaring and humidity suffocating, the mayor of Hull waved his flag and we were off.

As is usually the case the first couple of kilometres ticked by without much thought but by the time we turned onto the estuary front at 3km and into a bit of a headwind I knew this wasn’t going to be a good run for me. I was suffering with the weather conditions and the route did nothing to give me the inspiration to dig in and see it through.

After a short run along the cycle path next to the estuary the rest of the route was full of 90 degree turns, 180 switchbacks, cobbled streets and running through the pedestrianised shopping streets all while taking in the glorious (?) sights of Hull. With only a smattering of support, and despite the marshals doing their best, there were a couple of sections of the course that were hard to work out where to go unless you were following someone and there were a number of opportunities, should you be so inclined, to cut corners using the footpaths instead of the roads.

Whilst I was struggling, fellow Strider Matt Connell was powering away to a new PB, finishing 6th in a time of 37:22 despite having to shout for directions a couple of times. Richard Pearson also did well on his first 10k race for about 8 years, coming home in a PB of 40:13 in 30th place.

Amongst the other Striders, there were good performances from Izzy Carter (who was also less than impressed with the course), 47:41, and Ailsing Redmond, 48:05, both in the top 25 females.

For my part, I went through 5km in the same time as I did at the Vitality 10 the previous Monday but I knew I was slowing down rather than speeding up this time. My head wasn’t in it for the second half and I ended up a good 1:30-2:00 minutes slower than I wanted in 33rd place in 40:25.

There are no bad races though, just learning experiences. Lessons from Sunday: whilst I might be ok in high temperatures, I’m terrible in high humidity; A good crowd makes a lot of difference as does some interesting scenery, neither of which were prevalent in Hull unfortunately; I’ll agree to run almost anywhere if there is a shiny medal in it for me (I know I have a problem but I’m happy with my life choices).

… and a few half marathon words from David Bownes:

Yep it was a trifle humid in Hull so much so that a good number of runners were suffering with it.  It’s not what you expect in Hull but at least I didn’t get sunburned this time.   What I did get was the dreaded lurg which produced an even slower time for me than usual.  Excuses over!

The half marathon course was pretty much like the 10k just more of it; whilst up around the university is a bit greener than the centre, it is a bit underwhelming, really.  The route itself was, as Malcolm says, a bit twisty: 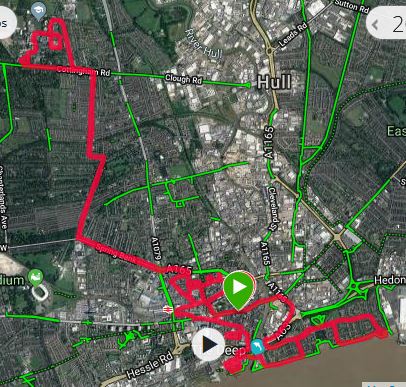 It was great to see a couple of other Striders before the run along with their entourages; a good turn out and some impressive times.  Talking of which Mohammad Aburezeq of Altrincham & District AC came first (by almost 5 minutes) in 01:08:42.  Kirsty Longley (Liverpool Pembroke & Sefton H AC) was first for the ladies in 01:19:34.

The Club was not credited in the men’s results 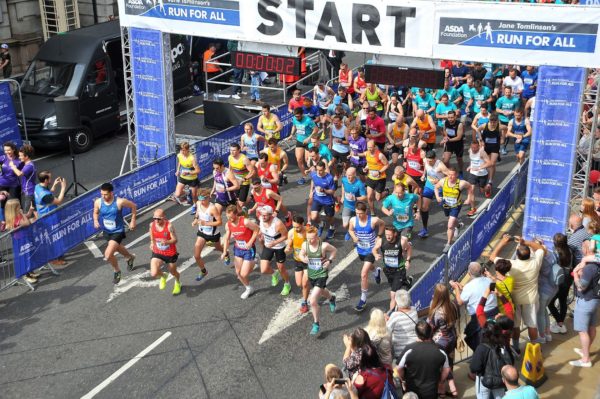