Ashby 20, is (unsurprisingly) a 20 mile road race organised by Ivanhoe Runners and described as ‘organised by runners for runners’. It starts from Ashby de la Zouch, an ancient market town in the heart of the National Forest. This is about an hour’s drive from south Sheffield.

The race was cancelled in 2018 due to the ‘mini beast from the east’ and around 50% of this year’s entries were from runners who were scheduled to run last year. So both myself, Andy Lock and one other Strider (who unfortunately we do not know or see on the day – sorry) Kevin Sibley, were all fairly lucky to get in as entries sold out in around 1 hour.

The day itself was lovely, with a bit of sun, without being too hot.  It is a slightly unusual start (for me anyway), in that you meet at the Bath Grounds, get into your timing pens and then walk en masse to the start. The race was very well organised (there was even an official drone taking a video of the start from up high which makes for an interesting watch). The course remains unchanged from previous years. You run out of Ashby and then have a challenging two-lap route that takes runners through countryside and villages and then back in for the finish. This did mean that the water stations could be used on both laps (with half the staff!), so meant there was plentiful opportunity for Jelly Babies, Gels, chocolate and of course water. The volunteers and supporters were excellent, perhaps again aided by the 2 laps. Another ‘new’ for me was that they closed some roads with ‘road-work cones’ and the lollipop STOP/GO sign to allow traffic to continue to flow in some of the villages.

On a personal level I ran with Andy Lock, who due to a slight injury only made the final call to run on the Thursday before (and only told this me on the day!). Him being injured and me being fairly fit (for me) meant we expected similar times. That helped as we dragged each other along at different points and finished in a touch under 3 hours, which was our target. 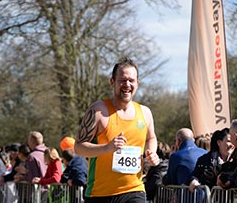