A good amount of Striders turned up to the Askern 10K on a glorious Wednesday evening.

I’d never run this race before and, although I enjoy the big events, it was refreshing to turn up to an old school, no frills race. I was mainly grateful just to be there, having struggled with a minor calf strain the previous week which had interrupted my training.

With a few weeks of low mileage and no speed-work behind me I had no expectations about how I’d fair over 6.2 miles. I didn’t know many people running but the magic of the green and gold vest meant I chatted happily with fellow striders on the start line and felt relatively calm. As someone who usually struggles with nerves before races, this made a nice change!

I toyed with the idea of using my Garmin, but with no idea about what pace I’d be able to sustain, it seemed pointless and I stuck to my usual tactic of running to feel. Off we went and I ignored the temptation to chase the women ahead of me, sticking to what felt a manageable pace and focusing on my own run. I felt comfortable and positive and within the first few kilometres I reeled in three women and didn’t see them again.

Running down a single file pavement in the early stages of the race was slightly frustrating with runners still being relatively bunched, but I actually think this could be a good thing – it made me slow down a little – no bad thing in the early miles.

Does anyone ever enjoy the actual pain that is 10K racing? In the moment, probably not, but in the midst of the agony I was able to register that I liked the course and would do it again.

Everything was going smoothly; I kept focusing on catching one runner at a time, staying positive and ticking off the kilometres. I started to feel the pinch at around 5.5 kilometres after working up the hill, but, after a rocky start running wise to the year, I took confidence from the fact I was still managing to push myself and work hard.

I won’t bore everyone with the details, but for three months at the beginning of the year I struggled with feeling very, very fatigued on 90 per cent of my runs and had a disaster at the Retford Half, which involved a depressing 10K walk-jog to the finish in the rain. Not my finest hour! So to actually feel like I had some fight in me on this occasion was great.

My mental positivity slipped a little somewhere between 8.5 and 9 kilometres as I willed the finish line to come quicker. Nevertheless, I kept fighting and finished 7th woman in 40.48.

There was a flash of disappointment in me when I saw the clock, but it was quickly replaced with the acknowledgement that after a tough few weeks and shaky start to the first half of the year, I couldn’t have done much more and was in a good place.

It was great to chat to other Striders and a special mention must go to Andy (Wuff). Great to see him back in action and running happy again, even exceeding his goal for the race.

First man home was Ben Butler of Wakefield and District in 32.44.  First lady home was Lyndsey Eastman of Kimberworth in 37.31. 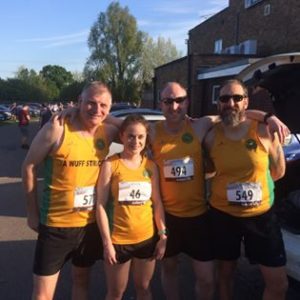