Yes, it was THAT Barbados – the Caribbean island with delightful beaches, great ice cream, sunshine, some sporting tradition (I’m told) and turtles to boot.

I stopped off there on my way back from Central America via a fairly complicated set of flights but it was well worth it – I could get used to the relaxed Barbadian way of life.

The half marathon itself was part of the Barbados marathon weekend which has been going for a few years and seems to attract runners from all over the place including Luton (I know), Durham, Canada and Martinique.  A great mix!

My aim with this run was to finish in a better state than I normally do, that is hydrated and not hypo’d.  I managed this by acclimatising for a couple of days before the race including walking around 15km per day in the rather pleasant but intense heat and keeping well hydrated.  The local watering holes benefitted from this as you can imagine!

The organisers also consider the welfare of runners by starting the race when the temperature and the humidity are (usually) at their lowest – 5am.  And yes, that did mean getting up at 3am to eat, then catch the bus to the start.

The start itself is outside the Prime Minister’s office so wasn’t hard to find although if you look at the map on the website you’ll probably doubt that!

I got there with said Luton lot and various other rather tired looking participants in good time.  We were kept awake if not alert by 80’s disco music whilst absorbing the mid 20’s heat and the pitch darkness of which there was an ample sufficiency.

The start was a relaxed affair as the loudspeakers weren’t working for the starter and he had to shout – not very loudly as there weren’t that many runners.

This is a road race and the first 5km or so took place in rather dim street lighting which didn’t help much – happily, an ambulance – which seemed to be accompanying the race – was close to me for a while, so I could see by its headlights.  There wasn’t any other traffic, of course, except for the occasional bus and motorbike and truck and car…

The conditions were fairly difficult given the heat and humidity and runners were taking things steady except those who were used to the conditions of course.  The organisers laid on a total of 7 water stations which was great – pretty much everybody I saw stopped at each one, including me.

Just to prove that this was Barbados, one drink station – I’m hoping it wasn’t an official one – was handing out tots of what they said was rum.  According to a couple of finishers I talked to, it was, too.

All in all, quite an experience!

As far as I know, I was the only Strider there but if I’m wrong, please say so!

The full results are here and mine were a sedate: 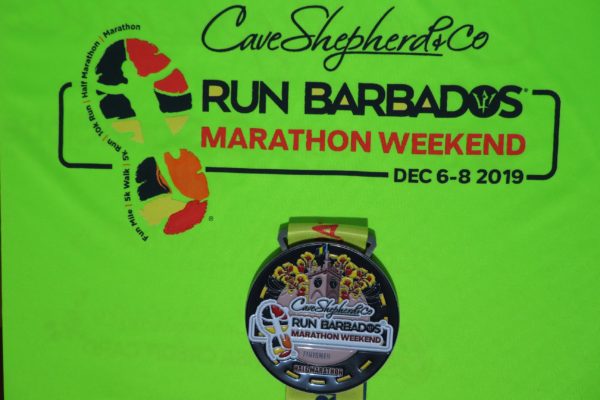