The eDreams ½ BCN was held in beautiful weather this year – perfect for running and even spectating.

Apparently 16,391 runners took part and I believe that – at the start it looked like everyone and his/her grandparent(s) had turned up.  As my run times are a little relaxed at the moment, I lurked in the last of 5 sections.  I nearly didn’t make it, having made the elementary mistake of setting my alarm for pm rather than am.  Still, a quick 2km jog (well, dash) helps with warming up…

I had plenty of recovery time as each section set off 5 minutes after the previous one, meaning a rather chilly 25 minute wait to start – hence the large differences in gun/real times.  Still, I chatted to loads of other runners from all over the place whilst waiting – very friendly bunch.

The route itself doesn’t seem to have changed much – see the previous reports in  2018  and again 2018.  Basically, once the crowds have cleared a bit, you head around the tree lined city roads – some of which are 5 lanes wide and normally a bit terrifying.  The conditions are great and the only problem I had was the glare of the unrelenting sun in the very blue sky.  Just like home.

The local people had the usual great drum bands which are a brilliant addition along with a really impressive band complete with vocalists at one point.

There were spectators around, particularly near the end of the race and they were enthusiastically yelling what I think was support.  There was other yelling too, especially when some of the more senior local residents elected to cross the run route without much regard for the oncoming hordes.  You need to be at the back of the pack to see all this; the faster runners miss out!

One of the unusual aspects of this race was that names were printed in quite large lettering on the race numbers; that meant spectators could shout your name at you.  I had thought there were just a lot of runners called David known to the locals….

Towards the finish, the support markedly increased with a good number of earlier finishers joining the encouraging throng; happily, I staggered over the finish line in a (small) gap, so the announcer had time to read out mine and the clubs name – fame at last.

The run itself is pretty flat but my watch insisted that I had climbed 118m – not sure I believe that.

In all, this is a great run in a great place; well worth going if you can. 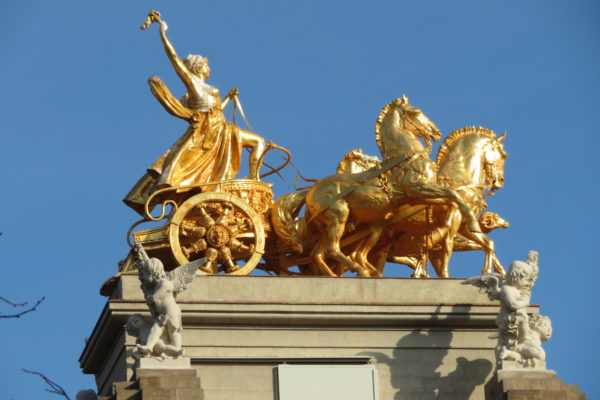