Internationals old and new abounded at this event with  Gemma Steel (Charnwood) toeing the line in a field which also included newly appointed CEO of UK Athletics Zara Hyde-Peters who somehow found the time to compete.  Promoter Bill Taylor makes the point that proceeds from the race go to help fund young athletes projects and prizes included specific awards for U23 athletes. 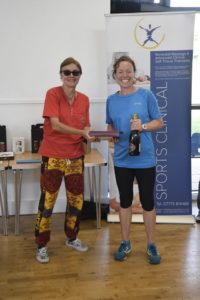 Lucy collecting some bubbly and short chain carbohydrates from none other than Veronique Marot who held the women’s British Marathon record for years and years before Paula Radcliffe took it off her. Photo Andy Hawkins

On a blustery but muggy afternoon Bill was delighted that both Ladies’ and Men’s course records fell with Lucy Crookes (Leeds) and Aaron Scott (Lincoln Wellington) recording times of 27:15 and 24:32. The Striders F45 club record also came a cropper with Lucy Broom setting a new mark of 33:18 and taking the F40 prize into the bargain with Sarah Allcard also picking up some loot with a second F40 prize of 35:27 as they both beat all the F40’s to boot. More Strider’s joy for Helen Eberlin who also lowered the club F70 record. We hope that the 44 Striders who made the 100 plus mile return trip to the flatlands of Lincolnshire were as pleased with their results. 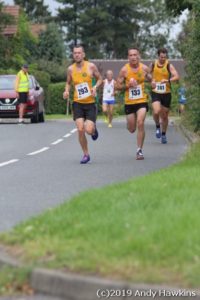 Jimmy Sharman, Ryan Hanson and Daniel Driscoll battling it out with Daniel looking at his watch for no apparent reason. Photo Andy Hawkins