Running festivals are becoming more and more popular, generally offering up a number of races over a weekend. Ignoring my track record of disaster when running in my place of birth, the timing of this event offered up a nice flat half to sanity check how marathon training was going and see if I was more dachshund than whippet.

My first mistake was entering the race prior to route being released, if I had seen the route beforehand I’d have quickly realised that this wasn’t going to be the road race I had in my mind, but very much a trail race. I did have some concerns too about how they were going to fit over 2,500 runners down some of the trails they had in mind but figured they’d have tested this out beforehand.

The festival itself was held in the local equivalent of Rother Valley, which made for interesting car access with a minimal car park and the official car parking being a fair old walk from the site. Thankfully I was able to relive my teenage years and get dropped of by a parent (round the corner of course), removing all the hassle. There was plenty of amenities available on the festival site including an open air cinema, making me think to get the best out of this event you really need to make a weekend of it. However, with the lack of car parking and camping space, I’m not sure how/where you could stay nearby to make this an easy experience. There is a Premier Inn on site (side note – I once caused this to be evacuated via accidental fire alarm), but I imagine it had quickly filled with runners.

Despite knowing the site quite well, I was still somewhat confused as to where the start was, and it wasn’t clearly signed as you’d normally expect. An enquiry to a Marshall resulted in erroneous directions, however the age old art of follow the herd won out in the end. At the start, the concerns about the route seemed to have been justified, as we were lined up on a path just about wide enough for 5 abreast, which also happens to be a national cycle route. I got caught up in a fair amount of traffic at the start, having a few near misses on tripping, both giving and receiving. A fair bit of energy was wasted having to take overtake opportunities when they presented themselves. There was a mildly amusing moment of the poor cyclist heading the other way being confronted by the onrushing pack, and rather then suffer the fate of Mufasa, he threw both machine and himself onto the verge.

Thankfully once the pack spread a bit and we reached a wider more open section I was able to settle down into my usual “ambitious” pace, and self deceive that I would be able to keep it up for 13 miles. The route then took us to Bedford’s “best kept secret”, the Danish Camp. Here again some of my pre-race concerns were played out, as the route required two laps of this section meaning that those starting their 2nd lap ran into the back end of race. This in itself wouldn’t be problem, but in places the trail narrows to pavement width and with some runners unable to hear shouts of keep left due to wearing earphones there were more than a few close calls and coming togethers that I witnessed. Another thing didn’t help was having the water station on a blind bend and I did in fact manage to rear end another runner who had stopped up. All in all it was quite a stressful little section, with again a lot of energy spent weaving and overtaking. By the time we turned off for the return and approached the 10 mile mark, I lacked the mental and physical motivation to push on and eased off a bit to just get the last 3 miles done with.

This actually proved to be a blessing in disguise, as the race wasn’t UKA licensed, despite being so last year. I suspect this might have something to do with the course which was changed from the previous year. I would have been less than happy to finally break 90 minutes and for it not to count! Lesson learned of always check beforehand if you care about that sort of thing.

First placed runners in all the races were as follows:

Of course I wasn’t the only Strider in attendance, with Caroline & Peter Brash also venturing into t’Shire for an adventure. Peter taking part in the 10K:

Caroline joined myself in the Half:

I know I must sound quite negative about this event, which is a real shame as I think it has a lot of potential. With slightly better logistics and a route more suited to the number of entrants I think it could actually be quite a fun weekend away for non-natives. For natives; the saying I believe is “never go back”.

Maybe we should start thinking about starting StriderFest…. 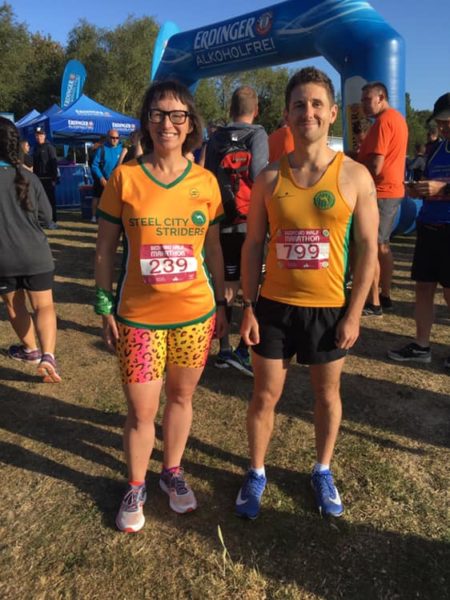