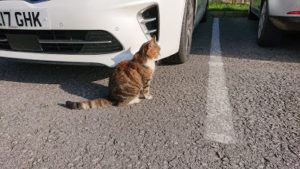 I wandered out of the car park into Belper town centre, deserted on a Sunday morning, and thought: “That car-park cat was lovely if a little standoffish, but where the hell am I? And more to the point where’s registration?” Belper is a small town with a World Heritage site located less than an hour’s drive from my house in North Sheffield, but it’s not in the Peak District so it’s the bit of Derbyshire you hardly ever visit, and I’d had to satnav my way there.

Eventually a nice Russian lady from Ilkeston turned up and between us we worked out how to get to Belper’s nicely appointed sports club to collect our numbers. On the way, she told me she’d “accidentally” finished as first woman in a recent marathon. (She ended up winning her category today too.) Anyway, formalities done and toilet visited, the whole field set off like ducklings to follow the race organiser to the start, past a derelict tights factory and an amazing beautiful weir.

Belper Rover seems to be a revival of the former Rugby Rover race, with new organisers. I never ran the old race so I can’t compare. It’s a long anticlockwise almost-loop, north and west of the town, with about 600m of climbing.

We set off up a narrowish track on a climb. As I’d been near the back of the pack it was slow progress with little chance to overtake, and people causing extreme bottlenecks as they tried to avoid standing water, not realising yet how pointless that idea was. We turned off across a field and over a couple of stiles, then on to a road and some nice soft woodland. (The rest of the race is in my memory in snapshots: my mind seems to be wandering a bit when I’m racing at the moment, which suggests I am a) tired and b) not trying hard enough.) After the woods, things started to get a bit lairy, with lots of pasture land and at one point a particularly grim cow-manure bog-stream. I helped a small-statured runner leap the worst bit as my good deed for the day.

By 10k, I was on about 3 hour 15 pace for 30k. I decided to try to keep to that for the next 10k and then see what I had left. Loads of the second 10k was also pasture land, which I find really hard to run on, but I managed to hold to my target, probably because a lot of it was downhill. At some point there was a ford where I gratefully sidestepped the footbridge and washed the cow muck off my shoes.

The third 10k (ish) was arguably the best bit. It started with a nasty uphill through a golf course, but I soon hit my stride and the ground levelled out and I started to feel a bit fresher. Then a massive long downhill and on to the flat, where we stayed till the end. The field was really spread out now, and I couldn’t see anyone ahead of or behind me. And that’s when I mis-read an arrow, and carried on round the sewage works rather than doubling back over a bridge. I realised a few hundred metres later that something was wrong. There really was nobody around, and the hitherto plentiful arrows had deserted me. I asked some passers-by to help me interpret the organisers’ map, but they weren’t local and I was tired, so I just decided to retrace my steps till I found another runner. Luckily there was one just coming through the point where I’d gone wrong. Enraged at the loss of 10 minutes, I set off just hammering it to try to regain some time. Then all of a sudden I came round a corner and across the finish line! What the hell? I thought I had another 2 miles to go! I wanted to catch up my average pace a bit! For %*!&’s sake.

But then someone handed me a medal and a bottle of beer and a buff (which compensated for the hole I made in my nice new socks), and I sat down and thought: “There’s no way I could have kept up that pace for another 2 miles. And I finished in less than three-and-a-quarter hours. And for once I did the last bit of a race faster than the rest.”

This is hard work (harder than the Hathersage Hurtle? Maybe, because there’s less actual trail.), but fun with lots of terrain (everything bar fell and beach, really). The marshals are good, the drink stations (bring your own water bottle) are good and the free beer was decent. On the flipside, the farmers of Derbyshire really hate anyone trying to cross between fields. Their stiles are convoluted, and the gaps in the walls you’re supposed to squeeze through are not designed for humans of normal size. 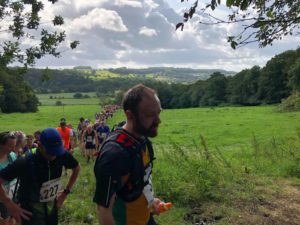