Just a week after the British Open Masters road relays, (Team silver, individual gold) in Sutton Park I headed back to my home town of Birmingham for the England vs Celtic Nations Masters 10K road race and Great Birmingham Run.

I recovered well from the very enjoyable 5K road relays and was excited about running in my second England vest. As an FV65 I had the World Champion, Penny Forse and former olympian Yuko Gordon to target if I was to achieve anything so the stakes were high. I had a 45:10 result in the qualifying race in Chester in March and had won gold at the BMAF 10K championships in Blyth in April with 45:09 so I knew I was in with a chance.

The course was not as fast and flat as I had expected and combined with cool, drizzly weather and a head wind for the return of the out and back course I struggled to keep a consistent pace. From the Cathedral on Colmore Row the route followed an unlovely A34 dual carriageway for 5K before turning and heading back to Aston University Campus, much improved since I last passed it in in 1970’s. When Yuko sped past me in the first half mile I knew I was up against a giant of Masters athletics. At the age of 68 she ran effortlessly whilst I, a mere 67, panted and pushed my heart rate to its highest in a race this year, around 180bpm. Yuko disappeared so then I had to hold off Penny, a veteran of the Montreal Olympic Games 1976. I could hear people shouting our names and willing us on but as ever, in my running bubble, much of the support was lost as I pressed on and dreamed of being able to breathe without pain at the finish.

Happily the finish gantry emerged and I’d like to think I shot through at pace, just not the pace I needed to close in on Yuko who claimed the gold in 44:22. With a time of 46:19, 35 seconds ahead of Penny I came in as runner-up to collect my finishers medal, T shirt and assorted snacks and drinks. Yvonne Twelvetree from Totley RC came in in 5th place in 49:13. There were seven women representing England FV65 but sadly a very poor turnout of Celtic Nations at the event meant that the event was not scored. It was good to see  some familiar faces, Strider, Stephen Schubler 35:26 and Dark Peaker Paul Fauset, 35:13

I had a special reason to go to Birmingham other than the race. My father, Frank Lane was born to Edith May and John Wells Lane in Handsworth, close to the city centre on 27th May 1919 the last of eleven children. Dad survived the unbelievable blitz on Malta between 1940 and 1943 as a Corporal in the Fleet Air Arm. He would have been very proud to see his eldest daughter compete for England and I had the honour of retracing some of his steps around the jewellery quarter where he was apprenticed as a silversmith around 1935. I occasionally wear the silver wedding ring he made for me in 1975. Happy posthumous 100th birthday dad and thank you for all your encouragement when I was a fledgling athlete at the All Birmingham Cross Country Championships in 1967….but that’s another story. 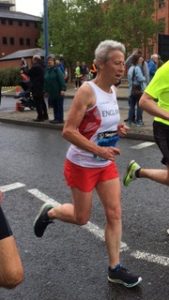