While everyone else was revelling at the Round Sheffield Run, I was living it up in the heart of the Black Country. What attracted me to the 10km Black Country Road Run I hear you mutter? The mystical allure of the Black Country? (Anybody outside of the Midlands asks where it is and why this is its nickname, in short – its industrial roots) – no, definitely not that..

Scenes from the popular BBC Peaky Blinders set? No, not that one either… To see the joyous look on the face of my mother for her eldest son who rarely visits much? Much more likely. The West Midlands is where I was born but I spent the majority of my youth living on the outskirts of Wolverhampton. Though, I must admit that I’m pretty apathetic towards the Black Country and tend to only associate myself with being from Birmingham. But that’s for another time…

To warm up for the 10k race I undertook a spot of parkrun tourism at the delightfully sunny Sandwell Valley park. The night before my family agreed it was a good idea (I was initially reticent about it all!) to go to check out the new Thai restaurant nearby to eat my weight in food (I was initially reticent but later convinced on the proviso of authentic and the ‘best Thai food you will ever eat!’), which, in hindsight, was an enormous mistake.  On the race-day I awoke with a dodgy belly and travelled to Halesowen, . I was welcomed by the very energetic marshals and members of Halesowen & Rowley Regis Rotary Club at the race desk, who were the event organisers. The mayor of the West Midlands, who had run this race a number of times, and the deputy leader of the local council offered some encouraging words before the tooting of the horns to set us off. The route was straightforward enough, two laps around Halesowen Town and a surrounding housing estate. This was a fairly similar make-up to the Dronfield 10k – a two lapper and into a housing estate, just, frankly, with a bit more elevation.

There was a cool breeze present for the first lap which subsided as the race went on but it wasn’t overly warm. I found it a real struggle to get out of third gear on the run even with the supportive crowd and the top Black Country Radio tunes blaring out. Note: Thai food and fast running is a terrible combo. Will I return? Probably not for this race in future but no doubt later on in the summer for the Stourbridge Stumble, land of Robert Plant (Led Zeppelin), The Wonder Stuff, Slade, Pop Will Eat Itself  and Ned’s Atomic Dustbin (the bass guitarist taught me music for a brief period at school). I’m also hoping to give one of the many fell races in Shropshire a whirl.

Full results can be found at: https://www.stuweb.co.uk/race/2bu 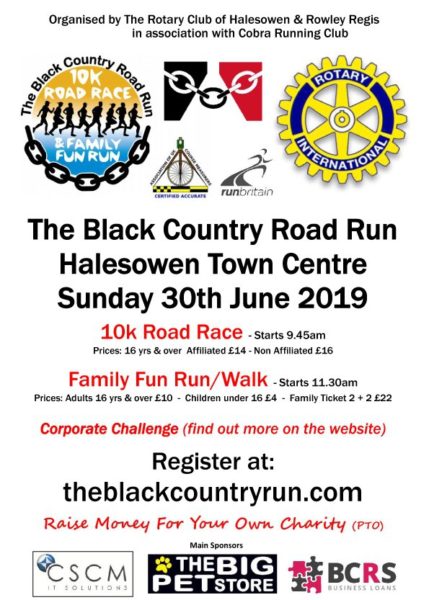