Described, accurately, as a lung buster of a course, this race is also notable for having Juniors (from 14 years old) joining the fray. Its uphill to almost exactly the halfway point, with an opening km on the road to reach the moors. The second downhill half is broken up with a cheeky steep further ascent just after the 3 mile mark. The last km is a fast descent of the opening road section.

The rain mostly stopped in time for the race but there were plenty of puddles to enjoy. I spent most of the race locked in a three way battle with Rob and Gilly. After a lot of to and frying I was first (just) to reach the top but predictably Rob came haring past me on the technical first descent, and I only managed to get ahead of him again on the second uphill section. Rob then had his work cut out for him to keep ahead of Gilly (who was fourth lady on the night).

Special mention to Nicola Rafferty who won the W50 category whilst her son, Tim was first MU23 – someone sign that young man up! 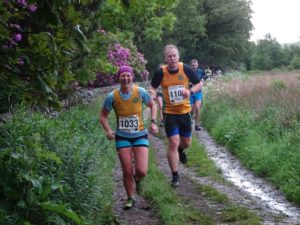 some enjoying it more than others (photo: Andy Buck)