Thanks to the phenomenon of Parkrun, my Saturday morning fix, I have become adept over the last six or seven years at plodding round Sheffield parks for twenty something minutes a time over a measured 5K distance. So it seemed a natural step to apply all that preparation and experience and enter The BMAF 5K Road Championships in Horwich, Bolton last Sunday.

Horwich, a pleasant town just off the M61, hosts an annual running, race walking and cycling festival. The event organisation is efficient; there is a spacious new leisure centre as a base, plenty of additional toilets and the town centre, traffic free course is flattish, just 153’ ascent overall.

The festival incorporates the British Masters race as part of the event. This is for athletes over 35 years old and is set in 5 year age categories from 35+ with no upper age limit. It also serves as a qualifying race for the England Athletics Celtic Nations International Masters Cross Country race in mid November, this year to be held in Southport.

As an FV65 I checked the start list looking for my adversaries. Yes, a few familiar names popped up but the the real talent in the line up was Angela Copson, now FV70 but a formidable World Champion across a range of events, track, road and Cross Country, I have yet to beat. I noted that men in the race outnumbered women by around 2-1.

After collecting my number, a thorough warm up and several ‘just in case’ toilet stops, I lined up with the cream of British older athletes for an 11:00 start. Children’s cycle races had preceeded the race, a joy to watch as big and little kids on an assortment of bikes pedalled their hearts out on the course.

For all my aforementioned experience at Parkrun I still leapt off at the klaxon like the proverbial startled ferret and recorded a 6:35 first mile, ridiculous at my age (67) and with two miles and no puff to go. Forced to slow down by the horrible rasping sounds coming from deep inside my throat I tried to gulp more air and look as if I knew what I was doing for the remaining two laps. Angela was clearly having a rest day, being the only FV70 in the race, but I had business to attend to and a medal to claim.

I finished, wrecked, in 22:02minutes, a 2019 pb by 12 seconds. Angela was right behind me, looking infuriatingly serene, but I had managed to beat her, just. This gave me a gold medal and a 92%AG and top UK ranking for my age, so perhaps gasping all the way round was worth it after all.

I know that the race calendar is full at this time of year but I do recommend this event as a fast and flat road race. To run as a British Master you have to join a regional club like Northern Masters AC as second claim club but then options of regional, national and even international competition become possible. I went to Horwich as the only Sheffield competitor. It would be great to have a few familiar faces with me next year. 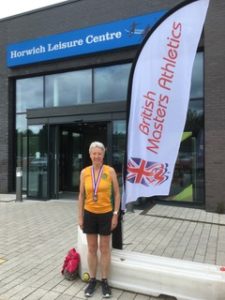