When we booked a week in Devon at half term and I was wondering where to get a long training run in, Adam found and suggested the Bodmin Half Marathon.  Sadly by the time I got round to entering it was already sold out so I emailed and asked to be put on a waiting list and heard no more….until a few days before the holiday when a place came up.

I accepted the transfer and picked up the number on the day labelled: Tom : male.  I also got his large sized T shirt, which isn’t actually a bad fit.

The race was in aid of the firefighters charity and started with the sirens of a fire engine, setting us off on two hilly loops around the very senic Lanhydrock estate.  Anyone who knows me knows I am slow up a hill so I found the height gain, around 700ft more than the Sheffield Half, a bit of a challenge (I will never make a fell runner!)

So it was my slowest half marathon yet but it was on very pretty trails and I chatted to some friendly runners en route, mainly about the hills.  It was a fairly low key event comprising predominantly West Country runners and my vest was noted by a number of marshals.   As it was over two laps, crossing by Lanhydrock house several times, I got repeated encouraging shouts of ‘go steel city’ and ‘come on Sheffield’.  A very friendly race. 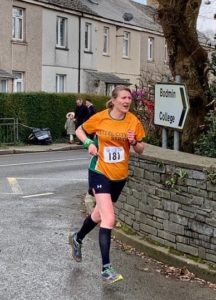 A flash of gold and green in the West Country