Race Date 15 December 2019
We’ve had a lot of weather recently and it played its part today with low temperatures made to feel even cooler by the biting winds which were in the face as competitors climbed from 5k back into Bolsover. Coupled with icy conditions underfoot on the more rural parts of the course, the word was that times could be expected to be lower than anticipated with a quick look through the results showing that many ran slower than at Percy Pud a couple of weeks beforehand.
However, this didn’t prevent Abbie Pearse from bagging third lady with a new pb and running under 40 minutes for the first time with Chrissie Dover (Derby) being the leading lady in 38:20. Stuart Carrack led the 24 Striders home finishing in 11th place with William Strangeway (Lincoln Wellington) first of 733 finishers in 32:19. 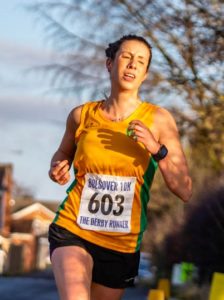 Previously known as the Coalite 10k, this was the 33rd edition of this event organised by North Derbyshire Running Club. Starting from The Bolsover School, the course is predominantly rural with about a mile run through the edge of town before heading north along the B6417. It then returns along narrow country lanes where running along the grit down the middle of the road appeared to be the best strategy to avoid the iciest parts. Net downhill going out, net uphill on the return although none of the slopes are difficult.

The race director apologises for the lengthy (grey, long sleeved) t-shirt queue. On open roads, adequate numbers of marshals were a priority and it’s surely worth a few extra minutes to ensure that the course is safe. This is a great club event which is a superb antidote for those who have given up their time to marshal at Percy Pud.