With Sheffield United Women’s development team due to play Bradford on the same day as the Bradford 10k, it seemed like a no-brainier to take part. Before the race pack landed, the fixture changed with Sheffield United being drawn against Huddersfield Town Ladies FC in the County Cup semi-final. I decided to do the race anyway, Huddersfield is sort of on the way home…

As promised in the marketing material, the Bradford 10k is a well organised, flat (ish) race with an expected 3,000 people taking part. The city centre provided the start and finish for this out and back race reminiscent of the old Sheffield 10k to Hillsborough. With an overall elevation of less than 60 metres, the route is fairly flat with a couple of small hills. It’s not a pretty route but friendly marshals and a brass band playing Chariots of Fire helped us through.

Despite the large field, I bumped into a fellow Parkrun Ambassador and saw a couple of Striders en route.

The race was won by Joe Sagar, Spenborough & District AC in 32.24 and the first female was Jemima Elgood, Ilkley Harriers in 36.23. 2456 runners finished. 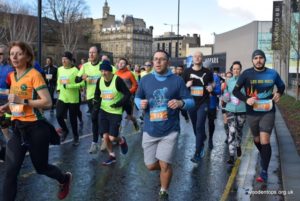 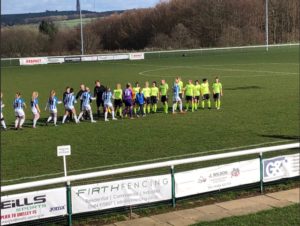