The Brentwood half marathon is an annual event run by the local Rotary club. It’s a mostly rural course undulating through the pleasant Essex countryside, thatched cottages that sort of thing. The iconic Sugar Hut is nowhere in sight! The course starts from a local school and the whole event has a very pleasant community feel to it with plenty of activities/stands and a brass band providing the soundtrack. We had nervously travelled down on Saturday through the tail end of Storm Gareth but by the time Sunday morning came conditions were favourable with slight cross winds and even the sun making an appearance. The course was generally well stewarded and we were cheered on by a decent number of locals at the various villages we passed through. In these distant parts I had the increasingly rare privilege of being the sole Strider, which meant I could also bag the elusive ‘double’ – first and last Strider home. This was also my first time running the course and with that unfamiliarity comes the feeling of apprehension that a monster hill could appear out of the blue at any moment. However, there were no nasty surprises until the final mile, ¾ of which is on an incline, coming just at the wrong time. However, with the Sheffield gradient in my legs I clung on to finish with a PB of 1h26m56s. 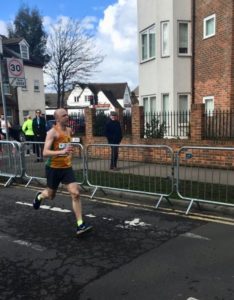