The Brinsworth 10k celebrated it’s 10th anniversary in 2019, originally set up to commemorate the life of keen runner Kevin Robinson, it has been organised for the last 10 years by Kevin’s family and has continued to grow from strength to strength, raising thousands of pounds for local charities.

188 contested the 2019 race, which is run from Brinsworth school and takes in the delights of Europa Link before heading back to the school. First place went to Kimberworth Strider Shaun Wright in 37:08, closely followed by team mate John Hackleton in 37:23. The podium was completed by Steel City Strider Sam Brown, who came home in 37:48. First lady, in 4th place, was Zanthe Wray, officially of Dark Peak, in 38:40.

Full results can be found here. On my counting, seven Striders completed the course, most notably Jordan Moat who made the top ten with a time of 39:55, however as affiliations are not given in the results then there may have been more of you out there – please shout up if you’re missing from the results below and I’ll add you. 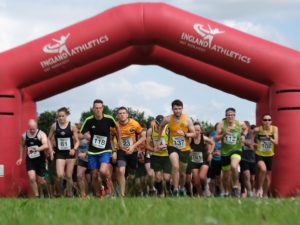 … and they’re off. Sam Brown leads out the pack, closely followed by Jordan Moat