At 67 and 3/4 I have finally visited a racecourse. Not a single big hat, big heels, or funny hand signals in sight. Aintree, home of the Grand National with its Queen Mother and Princess Royal Stands and a number of other fancy viewing areas was the unlikely setting for the 2019 British and Irish Masters Cross-Country Championships.

After my first International in Swansea last November wearing my shiny new spikes and bringing home F65 individual bronze and team gold I felt more confident in applying for the championships this year. I was selected along with friends I made at last year’s race and presented myself at the team hotel to meet dozens of other Masters (35 years+) athletes ready for the challenge.

The course was 6K, 3 laps for women and 65+ men and 8K, 4 laps for men 35+. At first sight in the inner area of the racecourse it looked flat and green unlike the mudslides of the SY league matches of this season so far. Once across the racecourse with its famous jumps, watery sounding Becher’s Brook, Valentine’s Brook and Canal Turn among them, the ground was a little more challenging, tussocky and wet, an energy sapping course despite the absence of any real elevation.

The team bus failed to arrive at the stated time at the hotel in Southport so I decided to drive the 17 miles to the racecourse to ensure a decent warm up and preparation. Irritatingly every other motorist in the area seemed to have the same idea so my car load spent an anxious hour at snail’s pace inching toward the venue. Missing the team photo call altogether I concentrated on familiarising myself with the course and ground conditions. The weather on that side of the country was dull and mild and the rain held off. Coach John Rothwell had made the trip to offer support and encouragement which was a real bonus after such a frenetic start to the day.

The 65+ male and female race was first so at 11:15, full of excitement and anticipation I joined Irish, Welsh, Scottish, English and Northern Irish competitors all in our National colours on the start line ready to gallop, canter or trot around the 2K circuit. I’m aware of my perennial issue around going off too fast and coming to grief half way round and then having to hold it together whilst my body is telling me to stop. I knew from last year that the F65 Scottish team was particularly strong and that my task was to keep them in sight and that’s exactly what I did. Anne White for Scotland took an early lead and I jostled back and forth with Jane Waterhouse for Scotland with Jeanette Craig closing in. The titan that is Angela Copson, now F70 eased through and I gritted everything and just tried to keep as close as my legs and lungs would allow.

Mind games started on the third lap as I almost convinced myself it was merely the second and there was still a long way to go but the watch was reading around 25 mins so we really had to be near the finish. Someone was breathing hard on my shoulder in the last 50m so I gathered all remaining strength and pushed hard for the line. Anne White was first F and gold medalist in 27:18, Jane Waterhouse third after Copson (F70) and silver in 27:35 and I crossed in fourth position for bronze in 27:39, just ahead of Craig who recorded 27:42. I had not been able to beat the two Scottish athletes but the times were pretty close. My England teammates followed in the next few minutes to achieve a team silver medal behind the Scottish team and ahead of Ireland.

A full Championship meal and award ceremony followed in Southport in the evening. This is where you meet athletes old and new including former champions, for example Ian Thompson now M70 and at Aintree to support his wife Margaret in the F65 team was the 1974 European and Commonwealth marathon champion in 2:09:12, the second fastest in history at that time. 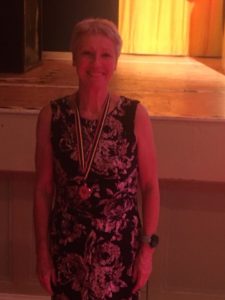 England won the Championships taking 12 of the 17 team titles and 11 of the 18 individual titles. 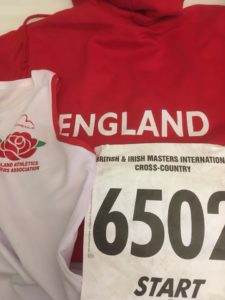