244 teams started this year’s British Fell Relays; among them were five Striders teams – the most we have ever sent to the relays. The day began with low cloud scudding across the tops and occasional drizzle, but soon brightened up into a perfect warm and sunny afternoon. The event centre was on the rough field under the Derwent Dam Wall, which was a cascade of water from the brim-full reservoirs. The four legs followed routes on the Derwent and Howden Moors, including some of the paths we use for the Salt Cellar Fell Race.

Leg one, for solo runners, started on the track just to the east of Derwent Reservoir in the Upper Derwent Valley, and followed a clockwise route to Lost Lad, south across the open moor, a steep descent and then ascent, and a last fast descent to finish.

Leg two, for pairs, headed to Lost Lad, then north into Abbey Brook and up to Wet Stones (which is just south of and only 3m lower than Sheffield’s highest point, the aptly named High Stones), a fast descent to the mouth of Abbey Brook, and then back up onto the moors before a similarly fast finish.

Leg three (map below), also for pairs, is the navigation leg – the map is not issued until runners start, who then have to choose their route to each of the controls, taking care not to cross any uncrossable boundaries (walls and fences) or enter any out of bounds area. This leg was a real test of route choice and stamina, with seven controls, including two to the north of Abbey Brook, and featured a glorious 50m bum slide into the brook after these two controls. 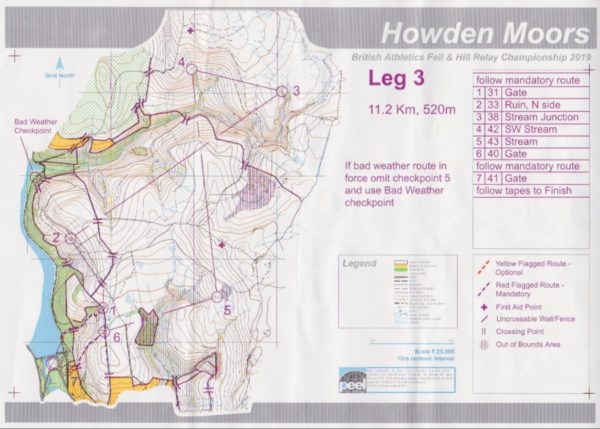 Leg four, for solo runners, followed an anti-clockwise route, with the second half following, albeit in reverse, the same path as we use for the Salt Cellar race.

224 teams finished, including all five of our teams. The winning teams and times in the main race categories are shown below, along with details of our teams, finishing positions and times. We had a really great day, including the cycle, jog or walk to Fairholmes from the A57, and with hugely creditable performances all round.

Pride of place goes to our Open Women A team (the Steel City Shiners) who finished an excellent 16th of 49 complete teams, with four teams that did not finish.  Our women’s B team finished 45th, which given it comprised mainly veterans was a commendable result.

Dark Peak Fell Runners began planning the relays three years ago. The event was brilliantly well organised. Many thanks to all concerned.

The 2020 relays are, we understand, being organised by Helm Hill Harriers, who are based in Kendal in the South Lakes. It would be great if we could turn out a similar number of teams next year. 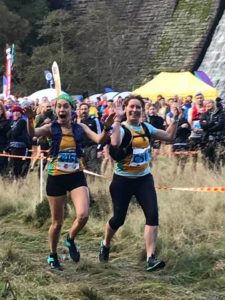