Tim Holt did an excellent job of getting teams together for this event, given the conflicting races over the same weekend. Eventually, 3 teams set off for Long Eaton near Nottingham on a very rainy Saturday; one men’s team (M35) consisting of 5 runners and two women’s teams (W55 and W65) consisting of 3 runners each. All legs of these relays were 3km for both men and women.

The journey down was a bit of a trial as the A617 (Chesterfield to M1 link road) was flooded and closed. It meant both ladies teams arrived with only half an hour to spare before their race start.  Tim, Gareth and Jane managed to get the tent up in the muddy and wet field which at least gave us somewhere dry to leave our bags.  Changing facilities were provided by the local rugby club but this meant negotiating a very waterlogged field; the nearby sports centre took pity on those who ventured inside and let them use their facilities too.

I was on first leg of the W55 team so scrambled to get numbers on (front and back – remember 8 pins next time), decided I needed my spikes so fitted the 12mm, tried unsuccessfully to keep my socks dry when I put my shoes on, then dashed with Helen to the starting pen. That was my warmup.

It was immediately apparent to me that trying to keep my socks dry was a pointless exercise as the course was waterlogged – not just wet mud, but running through at least ankle deep water. Perhaps Dot’s suggestion of bringing snorkel and mask wasn’t entirely in jest.  The course itself was almost entirely flat so in other weather conditions would be very fast.  There was a stream to negotiate, with marshals warning us to slow down as it was knee deep (they told Jane it would be thigh deep for her!).  The numbers on the back gave you a target to aim for as you knew who was in your age group.  I saw no one else in W55 whilst on my leg so I just pushed as close as I could to the W45 lady in front. The return to the starting area took us along a bank so it was good to be able to see the finish coming into view. I ‘sprinted’ over the finish and saw Jane being sent on her way – I was tired but knew that I had secretly enjoyed the water run. Helen soon came in for the W65s and Carol was off on her leg.

We weren’t sure how many other teams had turned up in our age groups but thought we had seen at least one W55 and a W65 behind us.  With Kate and Dot on the last legs, I was confident of a good result for both teams (there were three W55 and two W65 teams). The presentation for the women was almost immediately after the race and we were very pleased that, not only had both teams won their race, but Dot and Kate had posted the fastest legs in their age category.  Great result!

By the time we had finished congratulating ourselves, the men were already underway in their event.  Stephen and Jason finished their legs with smiles and great sprint finishes – Stephen was set for another lap he had so much fun.

Tim was very kind in telling us to get off home before the men finished – some of us were getting very cold, but it meant that we missed cheering in the rest of the men’s team (James, Gareth and Tim) and taking down the tent.

Given that the men had to put together a mixed age group team in the M35 category, they performed really well with a 17th place out of 26.  Salford Harriers were first in 53:13 (with their runner, Carl Hardman, running the fastest leg in 9:46). 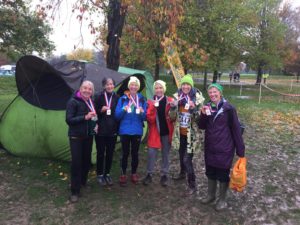 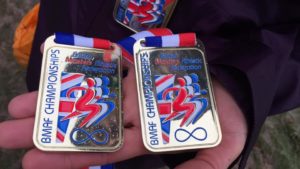