A few days after a PB on the Sheffield Half, I opened an email asking me if I would like to be a part of the Striders team for the forthcoming British Masters Road Relays. British Masters, I said to myself, in the kind of ooh-get-you voice that my grandparents would’ve used when I told them of some minor school-based achievement that they thought made me odds-on to be the next Prime Minister. After metaphorically patting myself on the back for a minute or so, I then started pondering the obvious question: Masters of what? The Universe? War? It was only through the (for me) unorthodox strategy of carefully reading through all of the information provided that I discovered that Masters, in this context, is a cruel synonym for ‘folk who are getting on a bit’ – a sort of Home Guard for runners, if you will. OK, that’s a little unfair. ‘Veterans’ sounds far more distinguished, and is far more accurate. I’ve had a few years to get use to this taxonomic suckerpunch now, and so it was that I found myself, at some ungodly hour on a Saturday, boarding a minibus bound for Sutton Park, Sutton Coldfield.

As we waited for the final few team members, the talk turned to Mo Farah’s recent London Marathon bid, and how it would be great if he were part of our team. A hastily-arranged enquiry concluded, disappointingly, that in fact none of us were Mo Farah, and that we weren’t expecting him. We’d just have to make do. A few minutes later we’d boarded the bus, and like a gaggle of school children on a trip, opened our packed lunches and started a meaningful dissection of Lord of the Flies (I went to a very posh school). Being a group of The Aged, a pitstop was required, and Markeaton Parkrun outside Derby very nearly found its ranks swelled by a healthy dollop of the Green and Gold Army, but the lure of the adjacent McDonald’s proved too strong. After Nick Booker caused significant confusion with a complex order of ‘one small tea, one small black coffee’, we were ready to hit the road once more.

Upon arrival, our first job was to pitch the Striders tent, which mercifully needed only a small amount of sellotape to hold some of the poles together. Our head honcho, Tim Holt, went off to do some head honcho-ing, while some of us decided a course recce might not go amiss. An explanation of the event might be useful here; runners in the age categories of V35, V45, V55 and V65 run legs of 5k each, with teams of between 3 and 6. Runners 2 to 6 wait in a holding pen next to the start/finish, awaiting the instruction from a race marshal to set off once their team’s previous runner has crossed the line (if you’ve done the Damflask relays, it works in a very similar way). The 5k course was on undulating tarmac roads through the parkland. Imagine Clumber Park on a slightly smaller and less National Trust-ified scale (fewer second-hand bookshops, fewer wax jackets and way less tweed). Nick Booker and I were delighted when our light jog around the course came in at 19 minutes; what badasses we are, I thought to myself, before realising that we’d missed out a 1k loop which sadly incorporated the steepest section of the route…

The real badasses, it turned out, were just tuning up. Be under no illusion – there were some fast runners competing. We watched with a mixture of respect and dread as the first V35 woman completed her leg in just over 18 minutes, and the first V55 male did the same in just over 17 minutes. Plenty of runners posted sub-16 minute times on what was a challenging course. No wonder the event had been given a whole-page spread in Athletics Weekly (copies of which were being given away to all competitors). Luckily, the Striders had brought along their own team of top-notch runners, in the form of the women’s V55 (Mandy Taylor, Nicky Rafferty and Kate Scott) and V65 (Helen Eberlin, Carol Beattie and Dot Kesterton) teams. In some of the first races of the day, the V55s took a brilliant bronze, and the V65 a superb silver. In addition, Dot came away with an additional gold medal for the fastest individual leg in the V65 race. Quality performances all round.

Meanwhile, Gareth Pert was engaged in some top-notch marshalling in what was possibly the gloomiest and coldest corner of the course (it even had its own Victorian gaslight, which gave a curiously Narnia-like ambience). Naturally, it soon became the noisiest corner of the course, with several Striders congregating around the ubiquitous cowbell to encourage any runner – Strider or otherwise – regardless of whether they wanted encouragement or not. A team gold medal might not yet have been forthcoming (spoiler alert: it never arrived), but the Striders simply would not be beaten on volume. Back at the tent, conveniently situated next to the home straight, the vuvuzela was added into the mix, to create a cacophony rarely heard outside of the Amazon Rainforest at dawn. Half-hearted attempts were made by other clubs to engender a bit aural competition, but their efforts were paltry by comparison.

One area in which Striders were playing second-fiddle (aside from the actual running, which after the highs of the ladies’ medals had, in my mind at least, become a secondary concern) was in the matter of tentage. Wolds Veteran Runners – who had pitched next to the Striders – were generating significant canvas envy with their marquee-style erection (*snigger*) stylishly embossed with their club’s name. Did it have bar, jacuzzi and/or changing facilities, wondered several curious Striders. Long story short (actually, short story even shorter)….. Stuart Jones investigated, and it didn’t. So now you know. Lovely tent, no medals. That’s a summary of their day out.

Exciting as all this was, there was still the matter of the men’s V55, V45 and V35 races to look forward to. After crunching the numbers, analysing the topography and studying the tea leaves, the tactics were decided: try and run as close to 18 minutes as possible, and don’t stop for a ninety-nine at the ice-cream van parked at around 3k. Jonathan Legon and Stuart Jones kicked things off for the V55 team, with the tonsorially-magnificent David Wilson, who may or may not be Santa Claus’ more athletic and less mince pie-addicted cousin, bringing the team home in a respectable 17th place. The V45 team of Adrian Fisher, Nick Booker (I owe him a coffee, but if we don’t tell him, he might forget….), Neil Schofield and James Storey cranked out an equally commendable 18th place – great consistency from the Striders.

And so to the main event, which is only the main event in the sense that I was in it, and I’m writing the report. The men’s V35 race featured teams of 6 runners, and the Striders pulled out some big guns (well, five big guns and a neon super-soaker….). The start and finish area was awash with the kind of lithe, magazine cover-adorning, day-glo trainer-wearing uber-athletes who actually win stuff. I suddenly felt small. As I attempted to blend in with the strutting and preening, Andrew Norton, Thomas King and James Fulcher all posted the kind of times that could win Hillsborough Parkrun, before James Rose laid down a sub-18 minuter. I stepped up with a time that wouldn’t win Hillsborough Parkrun (I know this because I ran it one week and didn’t win….), before Stephen Schubeler, with the day’s fastest Strider leg, floated round nonchalantly to bring the team home in 11th place, a galleon under full sail to my canal barge snagged on a discarded shopping trolley.

On the way home, after navigating the minefield of Facebook tagging in a typically prolonged, middle-aged fashion, a contented silence descended over the coach. We’d all ‘had a lovely day out’, and were looking forward to a cup of Horlicks in front of a re-run of Dad’s Army, blankets over our laps. As we departed, heartfelt thanks were offered – and are echoed again here – to Tim Holt for his efforts in organising the transport, entries and the itinerary. I’m glad that I took up the invitation to run in this event. I had fun racing, supporting, and chatting to some club members I’d not met before. As usual, my fellow Striders were nothing but friendly and encouraging.Full results, including such useful information as which teams actually won, can be downloaded here.

Striders detailed results, extracted from the rather complicated site linked above,  follow.  The course was the same for everyone and runner category is used:  As this was a team event, teams got the positions derived from individual runner performance.

** in addition, Dorothy was fastest over the course (1st); Helen was 7th fastest and Mandy 8th fastest.

* in addition, Kate was 8th fastest over the course; Nicky was 9th fastest and Mandy 10th fastest. 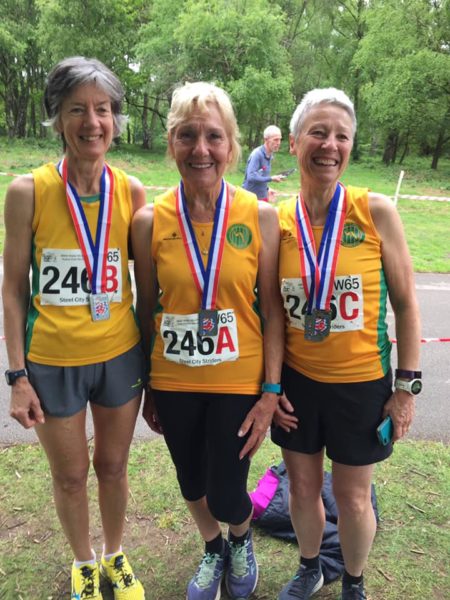