One of the best short fell races of the season.

Burbage Skyline remains a very popular race, drawing runners from far and wide. There were over 50 clubs represented, and over a third of the 320 participants were female. The 400 race entries sold out pretty quick, and although 20% didn’t show up on the night, that’s not such a big figure, especially given the hailstorm in town, the Blades’ promotion procession, the Liverpool-Barca game – and indeed, potential encounters with Highland Cattle (no incident were reported).

And 319 runners crossed the finish line, so just one drop out during the race itself, which is less than usual. Perhaps the firm going helped. I knew it was going to be a fast one and as such wasn’t wholly surprised when Steve Franklin came in 2 minutes ahead of Nathan Lawson’s course record (set last year – the first run on the new route).

Alas it turned out that Steve, and also Dark Peak’s own Ben Rothery in second place, had inadvertently taken the direct route between Higger Tor and Winyard’s Nick – whereas the new (fixed) race route veers to the south west, before making a sharp left turn eastwards to take in an extra climb before crossing over the Winyards Nick path. This is an easy mistake to make, and in fact the line Steve and Ben took is truer to the actual ridge – or skyline. It is however also the route of the Tigger Tor race, and in devising the new Burbage Skyline route I was keen to avoid overlap where possible, as well as build in as many short climbs as I could – hence the difference. As the route they took cut off a significant corner I had no choice but to withdraw their results. Needless to say, the guys had absolutely no idea of their error until I had the unenviable task of informing them; and also needless to say they both took it on the chin most graciously. Fellas, that was still an incredible run and I really hope you can come back next year and give it another crack. I’ll also make sure the route is better flagged next time.

After Steve and Ben the first back, and race winners, were Lee Kemp and Joseph Oldfield – both with 39:23, whilst the Ladies race was won by Ellen Downs of Sheffield University Orienteering Society – in a new course record (both overall and U23) of 45:20 – Congratulations Ellen! 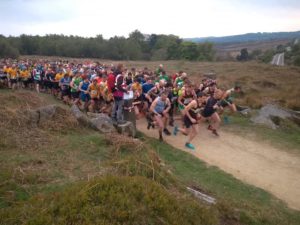