Ras y Gader, the Cader Idris mountain race, one of the toughest fell races in Wales, and viewed by many as a classic “must do” race in the calendar. The website description states:

‘The event starts and finishes in the market town of Dolgellau, at sea level, and climbs almost 3000ft to the summit of Pen y Gader itself. One of the real challenges of the race is the constantly changing terrain, switching from steep metalled roads to flat tracks behind Gwernan lake, pitched steps up the Pony Path, and picking your way among the boulder fields on the final ascent……..and then you’ve got to do it all in reverse!
The key to success is avoiding cramp with the changing surfaces and gradients on the way back to town.

The atmosphere at the finish line, for those who successfully complete the course, with cheering crowds will long remain in the memory’.

Runnable. (adjective) : capable of being run

Never before have I said one word that would later come back to haunt me, quite possibly for the rest of my running life! A word that now I can’t say or hear without it inducing a chuckle and one that seems to rear it’s head every time running is mentioned. It’ll probably end up on my gravestone at this rate.

So, back to the start of this adventure. Ben, Nigel, Dan and I met over in the Dronx and set off early afternoon, heading towards Dolgellau, a small town (you’re not allowed to say village apparently).  Joe and Jo would meet us later on that evening.

Probably a years’ worth of clothes packed into Dan’s boot and we were off. It’s amazing the things you learn about folk when you spend time away with them for the first time. Despite having enough mints and sweets to send a classroom of young kids into overdrive, it turns out Nige has something of a very sweet tooth! Every five minutes he would be offering a bag round before enthusiastically announcing what he would be shoving in his face next. This would be a theme that he would continue throughout the weekend, he ate more in that time than I would in a week.

Talk typically got round to the race we were all off to do and as the only previous Strider on the Cader Idris Mountain race who was in the car, the question obviously arose as to what it the race was like. For some reason ‘runnable’ was the first word that entered my head. I didn’t elaborate on it too much other than the terrain was easier than the 3 Peaks Race, which Ben and I had completed a few weeks previous. Looking back this was probably a slight oversight on my part, and we just left it at that. The next few hours passed relatively quickly without incident, the usual banter, catching up on running, life and any other nonsense that anyone wanted to chuck into the conversation.

We decided that we would stay in a bunkhouse right in the centre of town. Owned by a guy I had met on several occasions the previous year. In various pubs, the local kebab shop and half way up the mountain. He seemed a good lad when I met him and offered to send me (some) amazing blurry cam shots he taken of me that year. Apparently he also has a brother who is my doppelganger and announced this fact to everyone and excitedly set off looking for a picture of him so we could see. I must admit there are some similarities there.

Having never seen the place, I was sort of putting my reputation on the line. If it turned out to be a dump it would be very doubtful I get the job again although maybe that could have been a blessing.

We arrived about 5 pm and our/my fears were allayed as we were greeted by the lovely Ian and Hanneke, owners of the Plas Isa Guesthouse. Everything inside was immaculate, a brand new kitchen at our disposal (yeah right!) and much tea and coffee as we wanted.  I would definitely recommend a stay here. A nice sizable living room, and a well presented room for us all to stink out as the weekend went on. We also met a lovely lady who told us she was doing the local parkrun in the morning, which turns out was straight out of the back door. We had a casual discussion between us about doing it as a warm up, then it was forgotten about.

Excitement got the better of us and unfortunately this is where the wheels started to come off. It was around 5:30, we’d been sat in the car for about 4 hours, so what do you do? That’s right head off to the nearest pub. Looking back, this wasn’t exactly the greatest of moves as once we’d started there was seemingly no going back. It was going to be either A) an early night or B) we would drink far more than was necessary the night before we were to run up and down that big old mountain. Without any discussions around the two options, seems we’d settled on A. This is where I learnt the second lesson about my fellow companions. When Dan gets a fresh pint, you blink and half of it is gone. At first I thought it was exuberance and the fact he’d been driving but it turns out he did it with every single pint! The only slightly saving grace was that we were all pretty hungry, including the by then sugar fueled Nige. The pub we were in served what looked like reasonable food so we opted to stay put. I ordered fish and chips and when it came it was exactly as requested, except there were two fish on the plate!! We stayed in the ‘Torrent’ drinking more beer until Joe arrived sometime later that evening. By this point we’d had a lot more beers than we should and discussion got round to whether there was a record for the most pints consumed before the race, which in our group, I appeared to be winning.

In the morning, we had a continental breakfast provided for us and conversation once again came round to parkrun. Given the amount of alcohol consumed we decided it would be a good idea to do it as a means to sweat it out in time for the main event. The parkrun was semi-scenic but pretty uneventful, out and back (twice and along the path adjacent to the river). We all ran at a “slower than average”, chatty or sexy pace as I like to call it. Turns out this was Ben’s first ever parkrun, which clocking in at a breezy 27 minutes, would set up him nicely as a ringer for the Striders parkrun cup later in the year.

Parkrun done it was time for a little rest, for everyone except Nige who set off in search of more food. We eventually caught back up with him and met Jo and Joe for coffee and a small bite to eat then it was off to get ready.

About 30 minutes before the start of the race we met in at the side of the start line, pretended to do some light stretching, had the obligatory Striders photo then were herded through the finish line in reverse where our kit would be checked. The forecast earlier in the week had been for rain, it was actually looking like it would be perfect, slightly overcast with a gentle cool breeze.

A quick race briefing later and we were off. My race ‘plan’ as it were would be to try and get as far in front of Ben up the hill as possible and hope he wouldn’t pass me on the way back down, which happened on the 3 Peaks, on every single hill!

The route takes you out on the road and up the hill, and up a bit more for about 2.5K before it then flattens out and you veer off-road and through the woods round a lake for another 2K. Up to now….all runnable. As you pop over the wall at the end of a boggy field and turn onto a short road section, everyone’s head turns to the left and looks up in awe/fear about what’s to come.

From here is where it starts to get real. You have just over 3K left to the summit, but with a 729m of climb in your way. The path is very steep in places, well worn, but wide. There are some steps with the path zig-zagging up to the check point at the top where Mountain Rescue based. At some point on this ascent, Nigel overtook Ben and upon passing him was heard to mutter ‘this must be the runnable bit’. From the top of here you hang a left and up toward the summit, some of the path is quite rocky and tricky to navigate with the last climb to the Trig Point being a proper scramble. Once you touch the top, it’s a quick turnaround, unless you want to admire the stunning views. Then it’s back down the way you came. Fast, as fast as you dare!!

Having been a bit more cautious on my descents since suffering an ankle injury in January, I had to let go in the hope that Ben wouldn’t catch me! I took a slightly different, more direct descent especially down the zig-zag path and onto the bottom. I could hear footsteps most of the way down and once we had flattened back out towards the lake, one of the local lady runners complimented me on my route choice and said I was flying down the hill. She’d also taken a couple of places back in the women’s positioning and would end up finishing as 4th lady!

As per last year, once I got to the lake my legs went a bit and until the downhill section of the road back to the finish, I struggled a bit.  The road section seems long and pretty quick if you’ve still got it. Back through the village, round the corner and the finish is waiting for you. Thankfully no other Striders caught me, and the 1st Striders crown was mine, for I think the first time!

Stood around chatting after everyone had finished, we all paid compliment to the support from the locals cheering and shouting out our names to spur us on. Well everyone apart from Nige who decided to have ‘Nige Barnes’ printed on his number. Apart from it being something of a mouthful to shout it, the print was so small no one could actually read it as he went past!!

This is now my favourite race! Although it’s tough I would recommend anyone to have a go at it and back to my original remark, it is runnable. Just not by me! Yet!

5 Striders made the journey to Cader Idris and made a weekend event of it. Matt proved that the person that drinks the most the night before gets first strider. Well done to all in what is a truly memorable race. 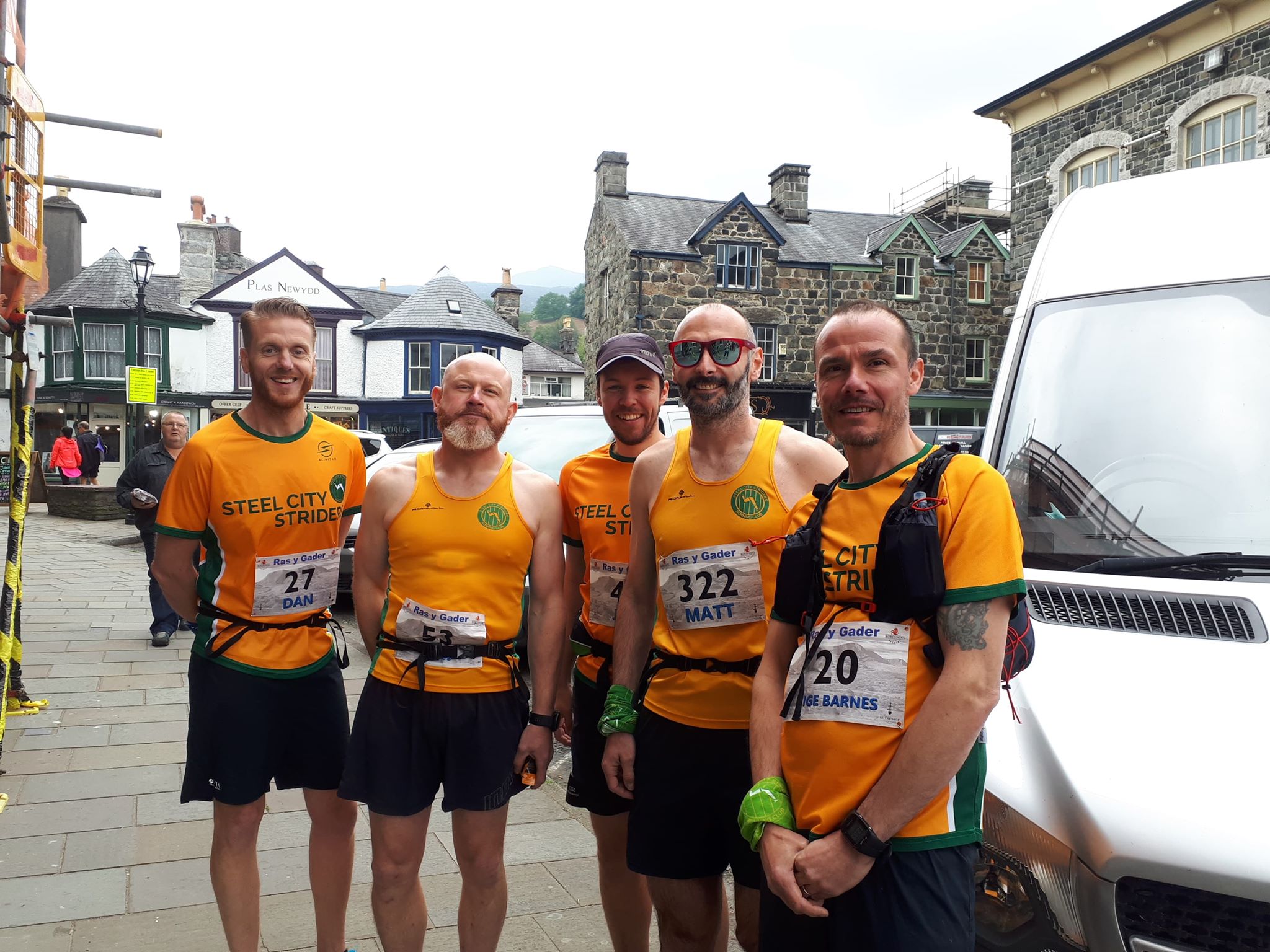 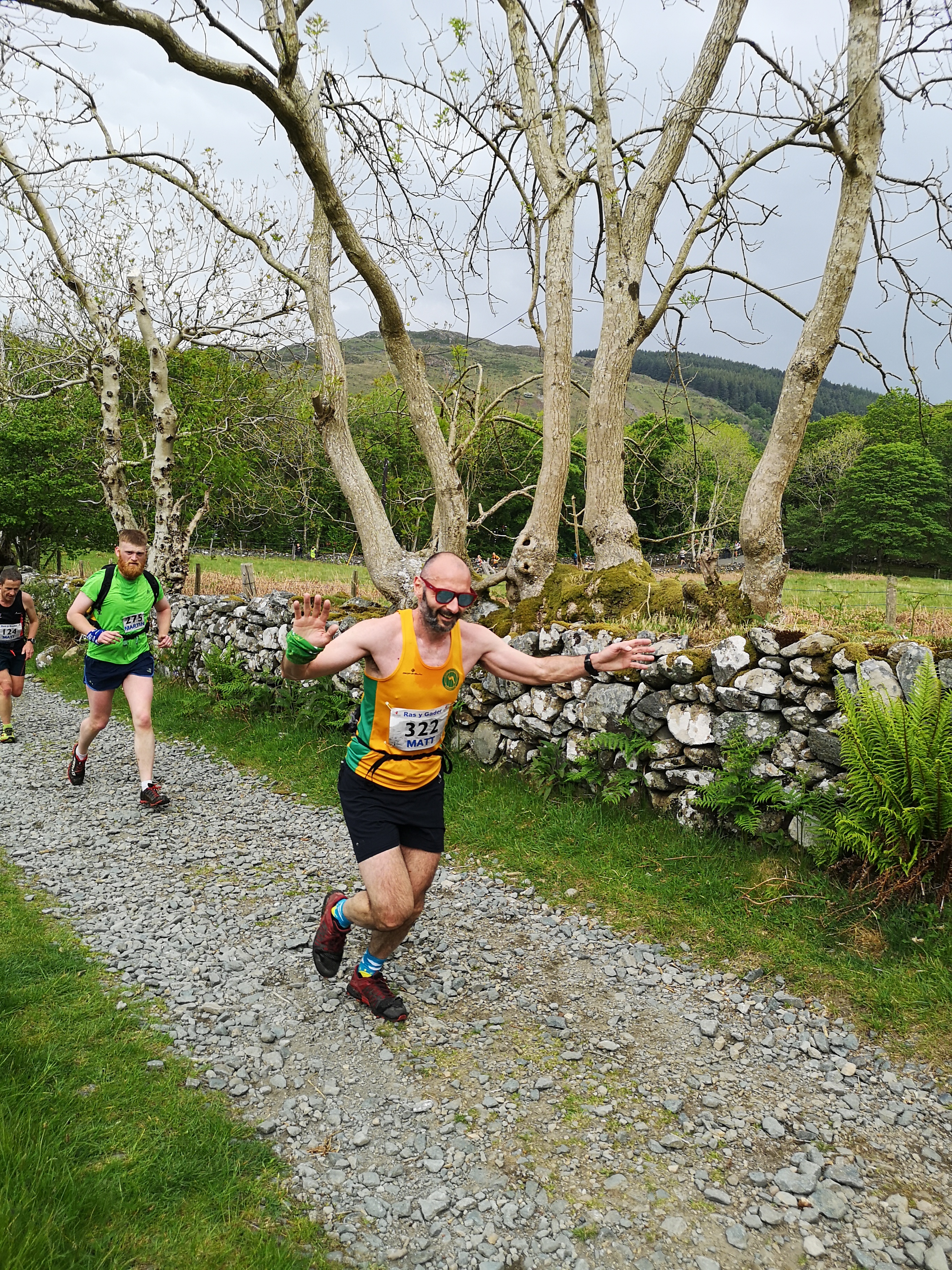 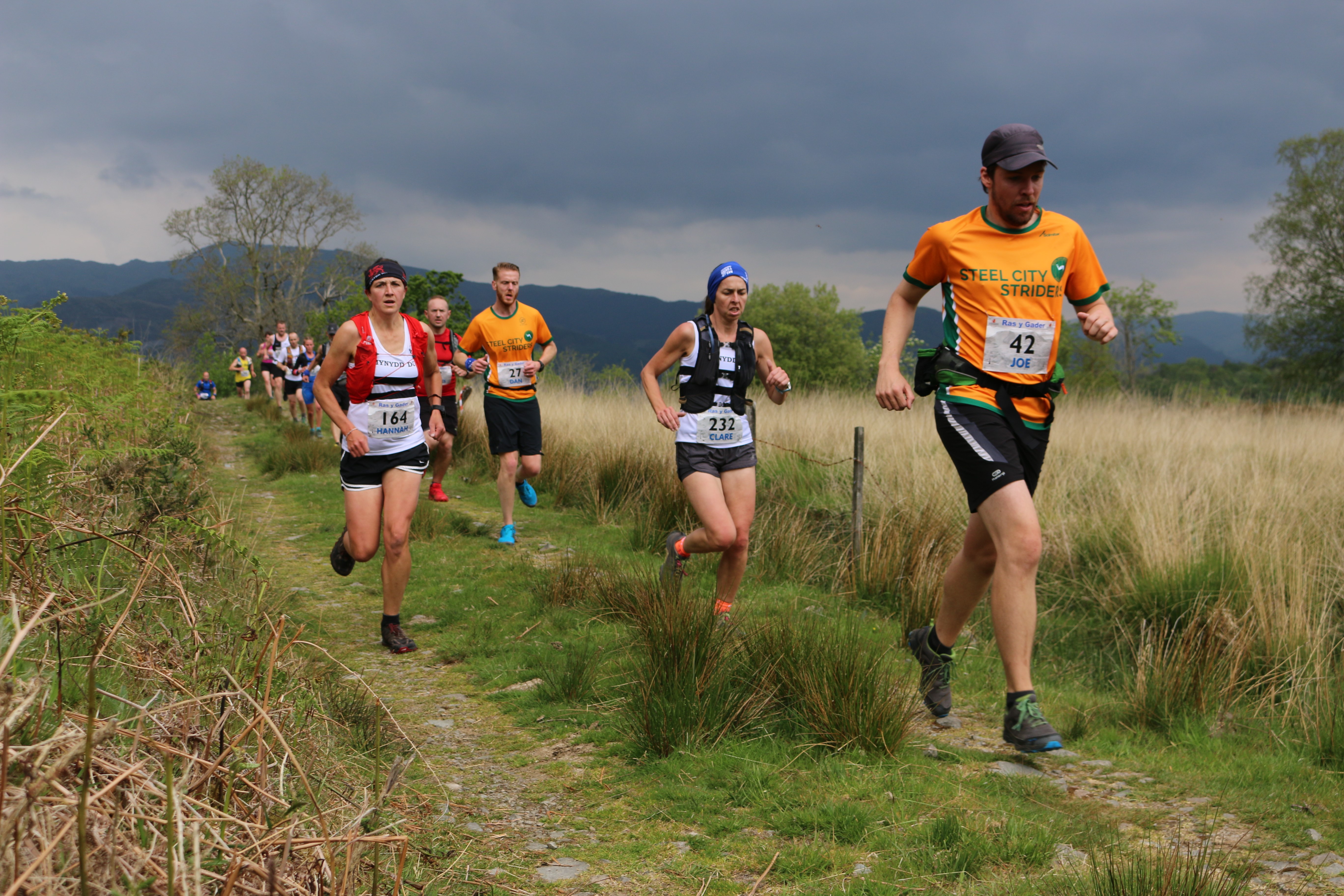