As we were both working in Madrid for a week and had a couple of days at the end to spare, Elin Reeves and I obviously decided to look for a race. The Carrera Down Madrid fit the bill perfectly. It’s run by the local Down Syndrome charity, so it’s a lovely inclusive event, with 2km (walk and run), 5km and 10km (=two laps of the 5k) distances. We collected our numbers on the Thursday, along with race T-shirts and interesting goody bags (tinned tuna and chicken soup included), then on Sunday morning rocked up to lovely Juan Carlos I park in the bright sunshine. “Rocked” is definitely the word. Whoever was running the PA for the warm-up was a big AC/DC fan (though they also had more questionable tastes), up to and including “Thunderstruck” as the race started. After a bit of a bottleneck on a bridge early on, the course widened out into nice wide paths, undulating its way through a well-kept landscape of trees, grass and lakes. There were marshals every few hundred yards, always ready with an “¡Animo!” or a “¡Campeones!” and a water stop part way round.

Thanks to a week in a conference centre with no exercise, neither of us were on great form, but we got round the two laps in just over an hour and had a good excuse to consume large amounts of tortilla, croquetas and craft beer for lunch. 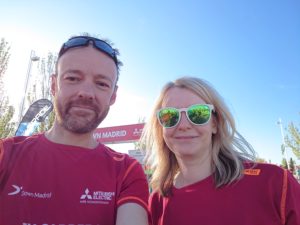 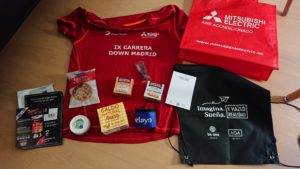