This event offers two days of half marathon & 10k races, taking place around the undulating, traffic-free trails surrounding Carsington Water Reservoir. The routes offer stunning views of the Lake and surrounding Peak District countryside and both races are ideal as part of a Spring marathon training schedule.

This is an undulating multi-terrain route using the paths and trails around Carsington Water. The Half Marathon is a complete lap plus and out and back section with 10k runners completing an out and back course. You can expect some inclines along with sections that use the footpaths surrounding the reservoir.

I chose to run the 10k on the Saturday.  It was near the end of the crazy February warm spell, and it promised to be a lovely morning.  However, we drove down from Sheffield in thick fog, and the lake was not visible on arrival!

To the further dismay of my supporters, the visitor centre was not open and there was nowhere to get hot drinks.  We’d been promised that the toilets would be open, and they were, however not a toilet roll in sight!

That aside, it was a well organised event and everything progressed as expected.  Runners of both races set off together, with the runners of the half doing a loop of the lake and a little out and back bit, and the 10k runners doing a straight forward out and back.  A change from last year’s course, apparently.

The course itself was nice enough, an undulating track (but no serious hills) with plenty of room, and decent views once the weather started to clear.  It was well marshaled, and they did a great job of encouraging me along towards the end as I was running third (F).

Was great to see a fair few Striders along the way, and as always I was helped along by the occasional shouts of ‘Go Strider!’  Just before the half way point Will Day passed me on his way back.  We had one of of those awkward ‘is it a thumbs up or a high five’ moments and consequently I ended up smacking him on the arm!  Sorry Will!  Was great to catch up with both him and Charlie Field at the finish line and get my apology in – good time for a photo too as we all got good results!

261 people completed the 10k, led home by Simon Ford (unattached) in a time of 35:50. Lynne Knight (also unattached) was first lady in 47:04. There were 342 in the half, Jarrod Gritt of Royton Road Runners came first in a time of 1:16:23 and Margaret Beever of Stainland Lions RC was first lady in a time of 1:26:33. Charlie Field and Daniel Cubitt were first Striders in the 10k and HM respectively, and Jennie Stevens took the gong for third-placed lady in the 10k.

227 people completed the 10k, led home by Liam Bradbury (unattached) in a time of 36:18. Lynn Burchill of Stadium Runners was first lady in 42:28. There were 327 in the half, Daniel Robinson (unattached) came first in a time of 1:16:18 with the aptly named Holly Rush of Avon Valley Runners (and the Marathon Talk podcast) taking the spoils for the ladies in a time of 1:25:32. There were two Striders present in each of the disciplines; 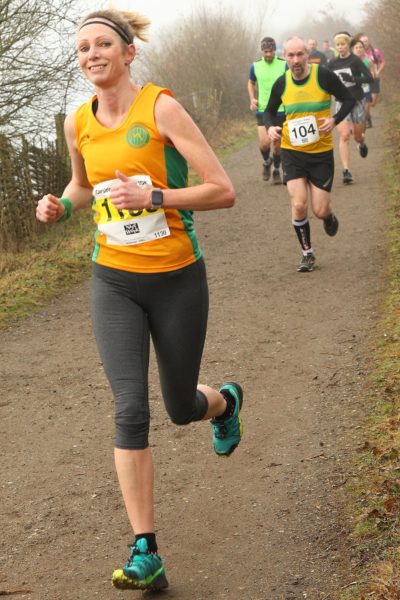 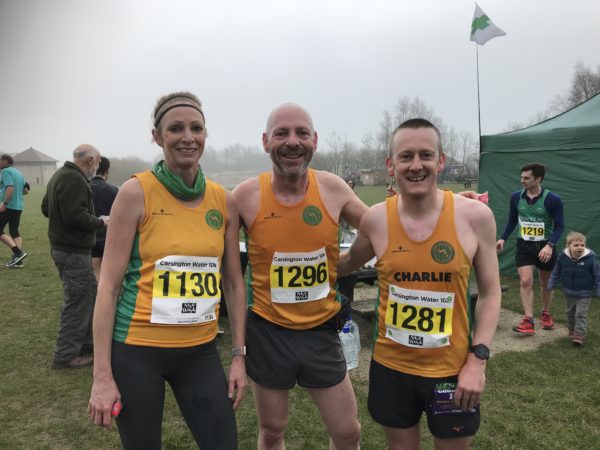 Jennie, Will, and Charlie