Not to be confused with the: Silverdale Stampede, or the Dobcroft Dash, or the Crosspool Crawl, or the Westways Whizz, or the Harrow (School) Half, or the Brooksie’s Bash (Foremarke Hall School), …

Trail races organised by PTAs seems to be in the zeitgeist, and the all-new Cat Lane Canter is organised on behalf of three schools, not one.

No idea where Cat Lane is? Let me explain…

Last summer I boldly led a few Heeley evening runs up the Gleadless Valley. There was a measure of surprise and a touch of fear as we headed beyond the foot of Meersbrook Park to the allotments and then snuck down a track to a small stream. Ahead was a steep bank back up to Gleadless Road, and to the right was a jumble of woodland and small open spaces. You could make out the green-clad tower blocks sitting at the foot of Blackstock Road as we ran up to the tip. The Round Sheffield Walk / Run comes down this way as it slices through Lees Hall Golf Club. If you take your rubbish to Blackstock tip, the race was behind there. Paul Stuart knows it well from his childhood days. 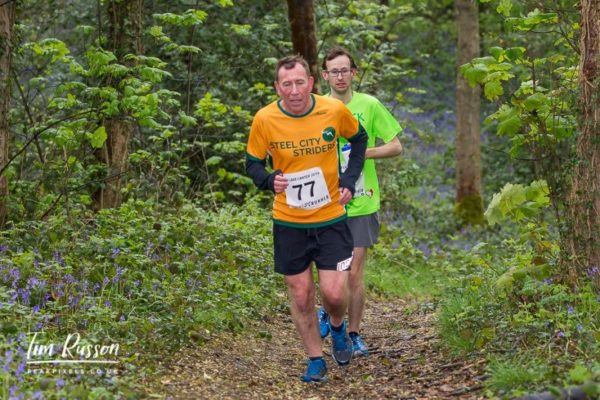 The creators of the race route used every path and twist of trail to form a (just under) 5 km loop that was hugely interesting, satisfyingly technical, and heartily vertically challenging. For example, the route stretched out to every edge of Leeshall Wood, you could cross a stream (the actual Meers Brook) on stepping stones or take the Trunce option, and the finish bank had a gradient of 32%! At this time of year the woods are washed with bluebells, though it is still too early for the wild garlic to mix its scent with the softness of wet leaves and bare soil.

Obviously 5k runners did one lap and 10k runners two. 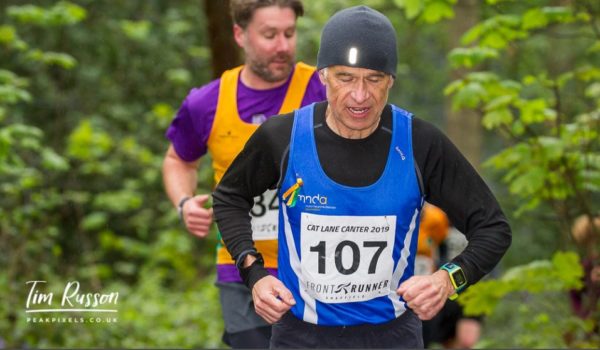 It was the view of Count Alexander Rostov that all of us must at some point choose a philosophy, a framework that supported understanding or a coherent system of cause and effect. For most of his countrymen that understanding was formed in the workings of the Church, though many went for the science of Darwin, Nietzsche and repeating pattern or Chekov’s dark poetic forms. The Count himself was much taken by the influence of minor weather variations – frosts and snowfall, fog and sunshine and delicate rain showers. While it was wet, both in the air and underfoot, there was only a little mud – but hopefully the race will repeat next year and a wetter spring might make this even more ‘interesting’. The drops would slip, the banks would see struggles, the roots might cause trips, the ground, if softer, could slow each runner, and 10k might feel like 13.

The organisers only need to do one thing: to marry the finish line with the plentiful cake / refreshment stalls. Separated by yet another bank we were put off a bit and so they were not patronised as much as expected. Perhaps on a drier day.

The results show loads of Steel City Striders, of course. Nick Booker ran (first MV50), clearly trying to up his LDS miles, and finished in 42:47. Paul Stuart (12th, and with a gashed hand) was there. Etc.

I nipped off before prizes were presented because I had a lunch date. Irrelevant to the storyline, but I wanted to boast a bit.

And my three-word summary was, ‘Brilliant, Brutal and Breath-taking’. 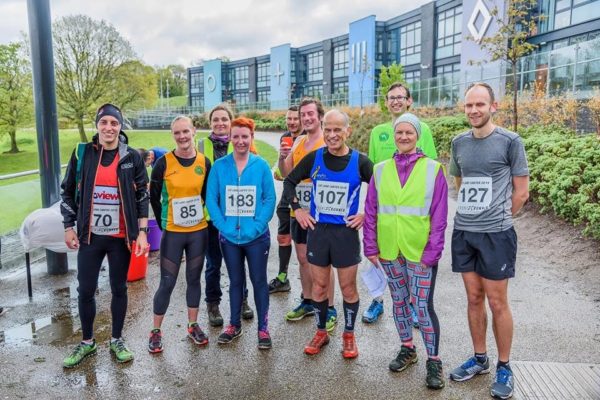