The Chase the Sun series of events challenge runners to get round the course before the sun sets. Each event incorporate a 5km and 10km within the same race. Each runner can then decide which distance to complete during the actual race itself; chip timing does the rest.

This time the weather gave the runners every chance of doing the race title justice. It was a gloriously hot evening; wall to wall blue sky and 24 degrees at the start of the race. The route, 3 times around the paths of Victoria Park, was thankfully almost all under the cool shade of some large London plane trees. Interestingly many more did the 5km rather than the 10km this time around, probably due to the temperatures.

Once again it was very well organised by the RunThrough company – with flapjacks, bananas, nuts, water (and the obligatory medal) for all finishers. The three water stations out on the route were most welcome to refresh the dry throat and to cool the head. 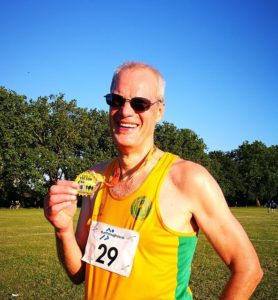