Having finally brushed off a never ending rib sprain I decided a week before what would have been race day to get myself on a 10k in prep for starting my half’s and marathon training. A number of different runs of hilly nature were available and so I looked at it the typical Yorkshireman way of deciding based on what do I get in the goodie bag. There it crossed my eyes the first 250 people who finish the Chatsworth 10k received a Bakewell tart. After many years of enjoying the fruits ( fruity Christmas pudding) of my labour from competing in the Percy Pud this seemed like a good race for me. After a quick look through the previous years results, to see that the 250th runner’s time in 2018 was 46 minutes, I felt confident that even with a couple of weeks lay off that I should still be in a shape where I could complete the course in under 44/45 minutes therefor resulting in my delicious treat.

After arriving a little later than planned due to a slow last mile of runners’ traffic into the Chatsworth estate I arrived  with around 20 minutes to go before the 9.30 start. This turned out to be plenty of time to pick up my race number (very organised team) find a portaloo (plenty of loos which is always a big plus in my book), a quick chat with fellow strider Matthew Bradbury, and wander over to the start.

The course was a mixture of grassy hills, well trodden paths and loose stoned roads. A fast downhill start pace soon settled down as we headed for the start of the 5k climb (the course being the classic if you can get to the top in one piece the rest is ‘almost’ all downhill-ish). Not knowing quite the shape I was in I cautiously approached the first part of the climb which was an extremely tough grassy hill. Following a self assured looking runner helped me to navigate a path that avoided some looser under foot looking parts. After a couple of minutes of watching my average mile pace drop considerably the course levelled out for a brief interlude and I was greeted by a smiling marshal who congratulated us on completing the first hill (how many hills were there to be like this! ). With this cautious congratulations in mind we continued up what was a reasonably testing incline on a path that, due to the way the path wraps round itself, had the feel of ascending a spiral staircase.  I did my best to get into my normal rhythm and stuck with the pack of runners that I had come up the hill with making sure to let anyone go who wanted to push on but also not dropping off and ending up in no man’s land.

Looking at my watch at around the 4.5k mark I worked out that I was on for about a 25 minute 5k which would leave me with about 20 minutes to run back down the hill and so safely claim my pudding prize. This gave me the encouragement to keep going on what was still almost universally an uphill first 5k. Passing a water station ran by some lovely laddies from the local charity Helen’s Trust (a charity that supports people in palliative care to pass away in their own home) that organised the event, I managed a smile. They were very enthusiastic and commented that I was the first to smile at them (counter to my normal Hillsborough parkrun gurn), which on reflection was a little disappointing as I found out at the end that 23 runners were ahead of me at this point (we do these things because we enjoy them right?).

Anyway the downhill started here along a stony walking path and continued on similar terrain of various technical qualities, with the exception of 2 grass sections, all the way back down. Not knowing the terrain I tried to hold a little bit back. I find that sometimes the easiest way to judge whether you have successfully paced a course that is terrifically challenging in the first half is by the number of runners you pass/have passed you in the second half. I am happy to report that I won this self battle 2-0 as I caught up with 2 runners acting as markers for me at 8 and 9k. The second half did have a few of those typical cruel short climbs that feel like they can’t possibly exist considering the climbing that was completed in the first part of the race but after the long stretched downhill I felt reasonably okay.

The last 1k was relatively flat in comparison to the previous 9 and followed a stony road back towards the start. At this point I was too far ahead/behind to make any impact on my position but worked out that I was hovering just above a 42 minutes finish at my current speed. The last few 100 metres was back up the grassy field we had ran down for the first 100 metres. I pushed hard but couldn’t quite get my time under the 42 minute barrier (this felt like a 40 minute barrier on this course) finishing in a chip time of 42.02 minutes, which I was reasonably happy with. More importantly I had come in 21st place and so earned my tasty treat.

+ tasty treat
+ well organised for an event of 1000 participants). Car park was 100 meters from start line.
+ well marshalled
+ lovely place to run
+/- hills (depends what you’re into)
+ if you have a child you can do the 3k fun run(starts 2 hours after start of 10k) for free with them.
– not a lot of support on the course as enthusiastic as the marshals were
– normal walking paths seemed to be still open so a little bit of dog hopping.
+ smiled in a race. 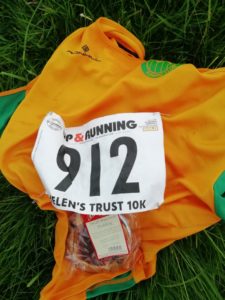