I arrived at the Bassingham Bash with legs still stiff from Thursday’s Strength and Speed session feeling a tad apprehensive about having to run the Cheshire Half the next day as well. Maybe I should take Bassingham steady and save myself for the Half….. but I just couldn’t resist chasing my fellow Road Race Division 9 Chris Smith for the full 5 miles (sadly I just couldn’t catch him – well run Chris!) Hmmm, legs even more tired now. Maybe I should just practice marathon pace tomorrow in preparation for Chester in October. In fact, I found myself thinking on the way home, I could just not turn up for the Half at all, no-one else was going and it is a long drive. But my spare Striders vest was already laid out with number attached so I got up early on the Sunday and drove to somewhere in the vicinity of Macclesfield.

The race starts and finishes outside the handsome Capesthorne Hall with plenty of parking in the adjoining field, which would provide some ‘fun’ after the rain later on. The route itself is rather like the North Lincs Half; flat and rural with no other support other than the lovely marshals. It did have a succession of pretty villages with some large, expensive looking houses though. I set off reasonably well but tired around miles 8-9 and had to have a bit of a word with myself. I thought about the long drive home and how I would feel if I drove all this way to get a ‘nearly’ PB when, with a bit more effort, a decent time was with reach. I spent some time doing maths in the cooling rain and pushed hard. The attached picture is a bleeding eyes classic. It was worth it for nearly a minute off my PB. You get an impressive amount of food related goodies at the end which was good as I do love a post race bag of crisps. I managed not to get the car stuck in the now muddy field (just don’t rev it folks) and happily drove back in time for lunch.

First male was Chris Pownell from Knowsley Harriers in 1.13.39
First Female was Emily Kearney in 1.16.31 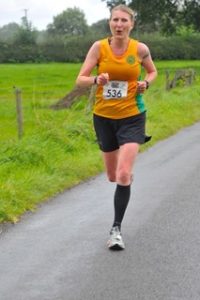