After spending most of the week worrying about a sore hamstring, it turned out that this was the least of my problems. On arriving at my hotel, the day before I was pleased to see a church opposite, which suggested that I might actually get a decent night’s sleep before the run on the Sunday. It soon became apparent that my hopes of this helpful rest wasn’t going to happen, due to the bar/nightclub a little further down that was playing banging dance music until well beyond my bedtime. Add the hen party that were a couple of doors down from my room and this was far from ideal preparation.

Having had a lousy night’s sleep I managed to wake up before my alarm went off, which meant I was more awake than I could have been. After working my way through 2 pan au chocolates, a Lucozade and a litre of water I headed for the racecourse just down the road. There were toilets and urinals as far as the eye could see. I can’t fault the organisation at the start point. The baggage drop was smoothly done, leaving me just enough time to have a short pre-race warm up.

The route itself is a race of two halves, with slightly uphill on the way out and therefore slightly downhill on the return. The support in the city centre is rather good and it is reasonably well supported as you head out of town with encouraging marshals and water distributors. I opted to set off at a gentle pace to see how my hamstring reacted. After a couple of miles, it didn’t feel any worse so I maintained my sub 1:45 pace for the first half. Having reached the halfway mark, I decided to up the pace to take advantage of the downhill sections and was pleased to see the 1:40 pacers with about 3 miles to go. I managed to finish in 1:37:23, a new pb by 33 seconds!

I would definitely recommend this half if you get the opportunity to do it. Also, Chester does seem like a nice place to explore, but unfortunately I opted to watch the FA Cup on the Saturday instead.

The race was won by Mohammad Rezeq of Altrincham & District AC in an impressive 1:04:28 with the first lady being Kirsty Longley of Liverpool, Pembroke & Sefton Harriers in 1:19:03. I was the first Strider to finish, then again I was the only one to take part this year. 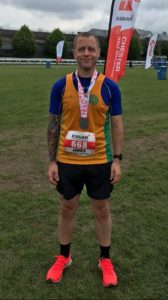