Since getting a GFA time at London in 2017, time has passed on, the body creaks a lot more and the only thing those three letters stand for now is Good, Far Away…..

So wanting to cash in the GFA place and to get my fifth star out of six I decided to get Chicago entered. It was probably the one US major marathon I’d not got massively excited about, simply because it gets overlooked by Boston and NYC, but it probably turned out to be the best of the three. With my targets reset in February I just wanted to get round and aim for a time of 4:49:59, a qualifying time for Comrades 2020.

Flying from Heathrow via Dublin meant that immigration was done in about 30s and within an hour of stepping off the plane we were wandering through downtown Chicago looking for the hotel. A quick leg stretch run around the Riverwalk turned in to an excitable photography / selfie run.

Friday brought day one of the expo. I’m always amazed at how Americans love a queue for merchandise but Nike merch queue was something else. Nike’s FD must have been seeing $$$s rolling in over the course of the weekend. But you certainly felt like you were at one of the majors with all nationalities present.

Saturday saw a trip to Heritage Harbour parkrun, about 70 miles outside of Chicago. HH seemed to be a rich person’s playground, but all the rich people had taken their boats elsewhere and locked up their condos for the winter. A small field (26) saw some great hospitality from the locals with plenty of opportunities for carb loading on bagels, muffins and coffee in the yacht club house after the run.

Marathon day saw an early start, with bag drops opening at 5.30am and my start wave going off at 7.30am. The usual toilet and bag drop queues waited and then a quick dash in to the start pen. A pretty iffy rendition of the national anthem, announcements of the elites (big cheers for David Weir and Sir Mo), dodge the flying hoodies in the final minutes and then we were off.The first thing to note was the noise. The people of Chicago come out in force and from the off it was just a wall of noise. More of that (or not) later. The second thing was the iffy GPS. Mile two ended up being the quickest mile I’ve ever run at 4:30 something. I followed that up with a nine minute something in mile two. The high-rise buildings and underpasses, which were great to run through and under was playing havoc with the watch. But mine wasn’t the only watch playing up. I could hear numerous random conversations going on around me about what mile were we at. At mile four my watch said 4.4m.

Running north seemed to be through lots of parkland hugging the banks of Lake Michigan, and a u-turn back south took us through Old Town and a mental note to come back here for lunch before we left.

Back in to downtown for the halfway point and the noise was relentless, which got to deafening as we ran through an area with charity tents on each side. Chicago Bulls arena was a bit of a let down and then next thing we’re coming up to Chicago White Sox stadium. A quick left turn and we’re in the final stretch. A surprise find at mile 23 was the unexpected sight of a Goose Island van giving out beers to the runners. With the voice in my head saying “have one” the sensible voice in my head shouted louder and said “it’ll mess your guts up, wait until the end” so I ran on.

As we made our last major turn north there was only a couple of miles left. The noise increased again, right up until the last 600m, when the public are cordoned off and it’s VIP ticketed supporters only. As a result the bleachers were 20% full, there was hardly any noise and after the buzz of the previous 26m the last 0.2m just seemed a bit flat.

Finishing line crossed, bottle of water in hand, medal around the neck and then before you’ve got your breath back a can of Goose Island beer is thrust in to your sweaty hand. Why thank you!

Whilst a finish time of 3:40:06 was well outside my times of a couple of years ago, Chicago was perhaps my most rewarding run. Comrades qualifier achieved, medal obtained and perhaps more importantly I finished with a huge smile on my face and my head hadn’t fallen off somewhere between 18-21m as it invariably does. Chicago turned out to be a fantastically welcoming and interesting city too. Both the run and the city are well worth a visit if you get the opportunity.

The crowdfunding campaign for Tokyo starts now. Please give generously. 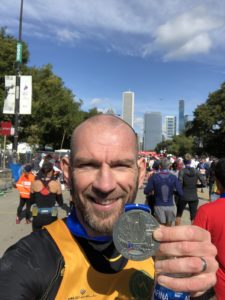 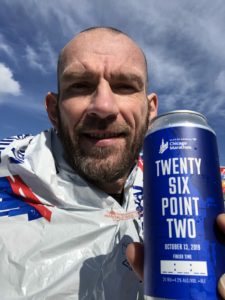