Five days after officially signing up as a Strider, I took to my hometown of Chorley, Lancashire, to run my first race representing the club. Much to my dismay, this was without my new vest, as it had landed through my Sheffield letterbox while I was away in the hometown of steak puddings, Eccles cakes and Joe Gilgun. This was to be my second race – after March’s Dronfield 10k – and the third time that I had ever ran that distance, and so nerves were bubbling. On the Tuesday, my confidence had been given a little boost by completing the 5-10k group’s final session and making it around in one piece. The group is fantastically led bi-annually by Striders such as Matt Rimmer and Vicky Hawkins, as well as several other green and gold members who volunteer to support and encourage prospective runners.

This was the inaugural Chorley 10k and the race was organised with the support of Fylde Coast Runners. 1200 runners had eagerly sold the event out weeks before the race was scheduled to take place, with many people still desperately scouring Facebook pages to get their hands on a place. However, transfers had not been allowed and, rather humorously, on Sunday morning we heard the bloke on the tannoy disqualify number 2121 for brazenly wearing a woman’s name and number in the face of his clear male-ness.

The most running that I had ever done in my 18 years living in Chorley was probably to make the last bus home from town. I had considered the town to be reasonably flat, yet recognise that it may have been my lack of athleticism during my youth that had led me to this misconception. The course was certainly not flat (424ft elevation gain). Yes, my emigration to Sheffield means that I have begrudgingly got somewhat used to hills. However, the unanticipated heat sadly did not make the climb through Astley Park any easier.

Myself, my boyfriend, my cousin and some family friends joined the far end of the start line and shared murmurs about how bloody warm it was. Before long, we started off on a mile long descent down one of the town’s main roads, before turning right into the park where a brief period in the shade of the trees was much appreciated. The mild undulations started before a steep ascent back onto a main road challenged my calves. A loop up this road and back again confirmed our suspicions that the people of Chorley would be out in full force, flocking to support friends and family before heading to watch Chorley FC’s success in the playoffs unfold later that afternoon.

Naturally, the second lap felt much tougher. I frantically grabbed a water bottle just past the 5k point and succumbed to the temptation of briefly stopping to rehydrate. My boyfriend and part-time pacer Jacob, who has a much more natural knack for running than I and runs a 10k just over 49 minutes, did not care to hear my complaints regarding the heat/my feelings of acid reflux and continued to spur me on along the way. The last mile drag was tough, especially the uphill dip that preceded the finishing line, yet we sped up and I managed to get a chip time of 01.03.21: a PB of just over a minute. Certainly not the faster time for a Strider, but a reason to be proud of my first steps (or perhaps strides) as a member of the club, nonetheless.

First finisher was Simon Croft of the Red Rose Running Club in a commendable 34.34. First female was Jody McGurk in 39.32. 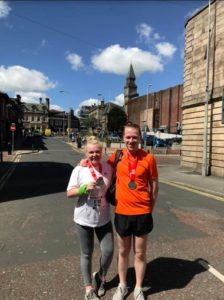