I’ve had my eye on Clowne Half Marathon for a while now, lured by the promise of a new hoodie and flapjack at the end. 2019 has been a horrendous year personally and like many others in similar situations, running has helped in carrying the weight of grief and signing up for races has given me something positive to focus on, so it seemed like a good opportunity to give it a go. Training had been going pretty well, until I managed to schedule my parkrun Cup round at Castle the day before (oops!). Never mind, it’d be fine, right?

Arriving at Clowne in plenty of time, I made my way to the start, past the man who was going for the world record in ‘running a half-marathon wearing a lot of t-shirts’ (76, I believe) and met up with a few Striders on the way. A short briefing later from the Race Director mentioning some water on the route, and we were on our way.

This was my kind of run, undulating country roads and atmospheric fog even if there wasn’t a view. At around mile 4, we started a long downhill section. Downhill sections this early in the race always feel pretty ominous as you know at some point you’re going to have to go back up… Turned out the water on the route was a couple of inches deep with no way round. For some reason, my insoles tend to scrunch up in my shoes when they get wet (if anyone knows how to avoid this let me know – it’s happened with two different pairs now!), and sure enough, my left one started to dig in under my toes.

Deciding to ignore it for now, I heard a voice next to me: ‘Did I run with you at Castle yesterday?’ Now this is what’s so great about running. I enjoy being part of a club but I usually train on my own. This is partly because when I started running, I felt really self-conscious that I’d be slowing everyone else down, and I think some of that imposter syndrome has stuck with me. But when I’m in a race like this, I love the connections you make with people and the short conversations you have at different points of the run. We weighed up the different Sheffield parkruns for a few minutes before he moved away from me. At mile 6 I chatted to a woman who, on finding out it was my first time at Clowne, warned me about a ‘cheeky finish’. ‘Is that a hill by any chance?’ ‘Yes…’

The support was mainly from those marshalling the route rather than the locals and some parts were a little hairy (running down a road that was open with traffic going both ways), but it’s worth giving a particular shout out to the two marshals who were stopping traffic so we could cross a main road without breaking stride. By mile 9 though, things were starting to catch up with me and my legs were tiring. Of course, this coincided with the start of the climb I’d been dreading, the payment for the earlier downhill. Gritting my teeth, I made it to the brief ‘out-and-back’ section that was added into the route this year just before mile 12, and as I was running back, I saw another Strider running towards me who gave me a wave, a hello and a thumbs up – just the boost I needed at that point. As he caught up with me, those around us started picking up the pace and we were soon flying downhill. Maybe that was it, the hill?! It was pretty close to the finish, and I knew I was nearly there.

But no, the sting is around 1k before the finish. Not necessarily a big hill, but with 20k behind you it feels massive. The marshal’s call of ‘it’s downhill after the traffic lights’ spurred us on, and all of us runners were shouting encouragement to each other. The final sprint down the hill was great, and I was thrilled to collect my hoodie and cake with a time of 1:46:36 and a delightful blood blister from my shoes.

Parts of it are scenic, other parts less so, but overall I enjoyed the run and it’s good to see this race will be part of the Road Race champs. See you all at the start line next year!

779 finishers in this year’s Clowne half marathon. The race winner was Mark Couldwell of Charnwood AC in 1.14.40. The ladies race was won by Helen Beck of Wakefield & District AC in 1.27.31.

Well done to the 10 Striders who made the trip. 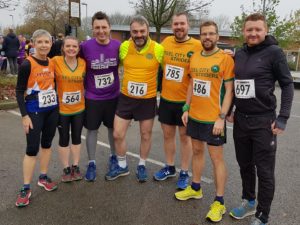