I wasn’t well prepared for this. I turned up with tired legs and a tired head, and I’d forgot to bring a bottle of water so I had to get a can of D&B from the chippy. That probably turned out well, what with all the sugar. Next time I’ll go all in and have a fishcake buttie.

Cracken Edge is organised by the Kinder Mountain Rescue Team. It takes place quite near Whaley Bridge, where during the week running up to the race there’d been a complete evacuation of the village because a dam had been overwhelmed by flash floods. The Mountain Rescuers had been involved in shifting people and looking after them, but loads of the volunteers still turned out to marshal the race cheerfully and friendlily.

After registering in Hayfield village, we meandered up a track to the start, and had the customary inaudible pre-race briefing: “mmmflmfle cows, mfflelflelff muddy, mffllfflfffle, GO!” I was surprised to find no Striders at the start line, but the previous day had been the Bradwell race where plenty had been running.

The race is officially 7 miles, and although it looks like a figure 8 on the map, it’s actually a pinched anticlockwise loop. It starts off on a steep uphill concrete track, which was surprisingly slippy in parts. I started near the back of the group, so had to climb this slower than I’d like, which did me good later on. At the top was a bottleneck stile with obligatory queue jumper who got moaned about on Facebook later, followed by a flattish field and another stile. My legs were feeling heavy and lifeless, and I was wondering whether racing had been the right decision.

Soon we turned left into a stream bed that was probably supposed to be a path, and although the gradient kicked up again I started to get into my stride a bit, and even overtook a few people. And after that it went downhill! I don’t actually remember most of this bit, but Strava says so, so it must be true. I do remember that towards the end of the downhill part we went on a road, and I suddenly realised that although I knew this race was “7” long, I couldn’t for the life of me remember whether it was kilometres or miles. I asked another runner. “Miles,” he said, looking at me like I was one of the many cowpats we’d run past on the way up. Maybe it’s bad manners not to know. Maybe he moaned about me on Facebook later.

I didn’t have much time to worry anyway, because they threw another hill at us. By this time we were circling the peak of charming Chinley Churn, and the race organisers decided we should get a bit closer to it by running up and along the eastern edge (which I think is actually Cracken Edge). This was a truly beautiful bit of terrain, all broken stone and drystone wall that seems to grow out of the natural rock, and stop-looking-at-how-beautiful-it-is-or-you’ll-fall-down-the-mountain. I almost forgot how hard I was working. Finally a little kick/crawl up to a crag at the very top of the race, and over the edge to a panorama facing west that I had to stop for a moment and gawp at. If I’d not been so slow up the hill I’d have seen the sunset as well.

After that it was downhill all the way, but what a descent! It started off gently enough, across a field, but soon it became a rutted and steep drop along what had seemingly been a farm track until the rain came. I managed to kick myself hard in the calf. Then we were into woods, and the ruts became slippery clay where I turned my ankle and had to slow down for a bit. And then we were out and on to a grassy, grippy slope and it was wonderful, and I did the best sprint finish and drank a glass of squash and the world was perfect for a couple of minutes till I tried to walk back to the car. And that, along with all the above, is why I am glad I have started running fell races.

Cracken Edge is a very enjoyable fell race, but like a lot of them you have to work hard to actually enjoy it. There were times this evening I wasn’t sure I’d manage that, but I think I did in the end… Definitely on the list of races to have another go at.

The winner was Steve Vernon of Stockport Harriers and AC, in 41:07. First woman was Lauren McNeil (unattached) in 55:29. 206 finished. 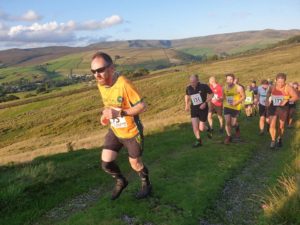