Some six hundred and seventy South Yorkshire club runners turned out on a humid drizzly evening to run as fast as they could around Dam Flask reservoir in a 3.5 mile loop including “that hill”. Eight teams of three striders women and thirteen teams of four striders men were amongst them so that would be 76 striders taking part. There were in fact only 75 available so Caroline Brock agreed to run twice.

Many thanks to Sheffield Running Club for this mammoth feat of organisation. Thanks too to John Kilcoyne for organising the strider’s teams including the inevitable last minute substitutions.

Fastest women on the night was Phillipa Williams of Sheffield RC being the only women to break 20 minutes (19:56). Fastest man was Connor Milnes of Hallamshire Harriers in 17:41.

(Kudos to Caroline for the fact that even her second lap was 28th fastest overall!)

The women’s race was won by Hallamshire Harriers, followed by Rotherham Harriers in second. Third place went to our own team of Caroline, Nicola and Sian!

First and second place, as for the women, went to Hallamshire and Rotherham Harriers, with the latter featuring ex-strider Tom Halloway. The Striders men’s “A team” achieved 7th place this year.

The Striders M50 team managed to take a medal for third in their category, due in no small part to our chairman who despite being a V60 ran the fastest leg by some margin (as far as I can see, only one V60 man ran faster). 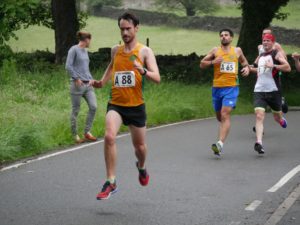