This was the third running of this longer trail running event on the footpaths, tracks and trails within the ‘grittier/higher level’ surroundings of the Northern/Dark Peak District starting and finishing from Hayfield in the High Peak.  The route, which took runners along The Sett Valley Trail, The Pennine Bridleway, Lantern Pike and Chinley Churn, is a hilly, moorland trail run in amongst the most stunning Northern Peak District scenery.

I’ll be honest, for me, it was tough, the longer route was just over 9 miles and then you picked up the shorter route for the second half.  The last and biggest of the 3 inclines was around 3 miles long and, for me, was a serious test of endurance, especially after the previous 9 miles and the fact that I ran the 3 Lakes Classic the day before.  Apparently back to back training is good for Ultra preparation?

On arrival at 8am, I only just got into the car park, as it was already bustling with runners and their supporters.  Hilariously however, on return, there was only 3 cars left in the car park.  Mine looking all sad and lonely, waiting patiently for my return.

The route was exceptionally well marked, which was a worry for me, as I did it on my own (that’s another story!) and the marshals were all very supportive and friendly.  I’ve done a few Dark White Peak runs before and they never fail to impress.  A definite ‘to do’ if you’re into beautiful countryside and killer hills. 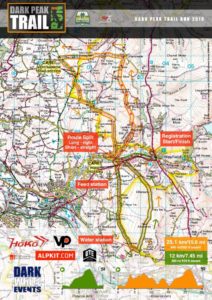