Curly’s first ever running of the Doncaster Half Marathon, The flat half marathon that wasn’t flat.

Im not a big fan of half marathons but when i heard about one in Doncaster that started and finished at the Keepmoat stadium i had to enter it with me being a Doncaster Rovers fan.

I arrived early and got parked up fine had a little walk around the stadium and met up with other striders. We had team photos taken on the track and a quick warm up then headed for the start.

My main aims of this race were 1 to actually run the whole 13.1 miles without walking and 2 of cause a PB.

I arrived at the start still unsure about going off with the 2 hour pacer or starting with the 2:15 one and then trying to push on. I chose the wrong one and went off with the 2 hour pacer the first 2 miles were fine although a little quick for 2 hours 8:49 for first mile and 8:45 for second. I slowed my pace a little and was happy just to keep her flag in sight. It was in the 2nd mile i hit my first hitch i felt i was running well keeping my eye of the flag when i felt something squelch under my foot i glanced back and realized i had trode on a dead hedgehog (at least i had it was dead before i stood on it) which now parts of it were stuck to the bottom of my shoe so i spent the next quarter of a mile shaking my foot around and finding every small puddle of water to run in. The heat had warmed up at this point too so the first water station at 3 mile was a pleasant sight. I took on some water and then realised the 2hr pacer had quite a large gap but was still in sight so i wasn’t too worried. At mile 5 i was starting to struggle and realized i had made the wrong decision going off that quick. Some of the faster runners were now passing by in the other direction so had a few shout outs and high fives off other striders. I passed half way in just under an hour so knew i was on for a PB but my legs were starting to tell. The roads were long and winding with not much sign of life until we reached Rossington where the crowds were gathered with jelly babies, slices of orange and water pistols which were nice.

My first aim of the day was over by mile 8 as my legs were done so slipped in to a walk/run. We left Rossington and went back to the boring white Rose Way which seemed to last forever but i kept passing the mile markers. Finally the stadium was in sight but was then cruelly diverted down another road heading away from the stadium. We turned on to lakeside boulevard then i knew it was nearly over but to my shock the 2hr 15min pacer was right behind me so had to work really hard for my PB. I managed to stay infront of him as we did a lap of the outside of the stadium. We then entered the stadium which was by far the best part of the day i put a sprint on only to realise i had to run all the way down the touchline and back up the middle. I crossed the line in 2hrs 15min 20sec so broke my PB by 14 seconds.

My thoughts of the day

It is not a flat half marathon like advertised (no where near Sheffield half but not flat)
Quite a boring route but for me the finish made up for that.
The T-shirt sizing needs looking at as that is not a Xxl.
Overall a pleasing day and a new PB half marathon time. 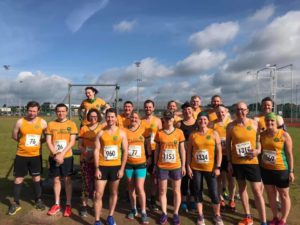