On the day that my Striders application went through I decided that this was the day to tackle my aversion to competitive running head on and did what any normal person does when there’s the chance of saving £2 – I took to the Interweb and googled 10 mile races (which allowed the use of head phones).

Double or Quit is a 5 mile multi-terrain route around Shipley Park in Derbyshire. Runners are given the option to ‘double’ up and do two laps rather than ‘quit’ after the first and, for those who still haven’t had enough, there’s the chance of a third lap if they reach the split point within 1 hour 25 (and can complete before the cut off of 2 hours 15).

As it was a bank holiday weekend I had the benefit of having the Mini-Me at home for a few days so enlisted her as support crew, loaded her into the car and off we went to Ilkeston for a 5pm start. We arrived far too early (we got there before the race numbers), giving me time to fret over not having a sunglasses and a hydration backpack which were sported by many of the other competitors. Was this some sort of rookie error? Mental note for next time.

As 5pm approached, 361 runners (and Nordic Walkers) followed the RD down a grassy slope to the start line, received a few instructions, then we were off. In 27 degree heat. Back up the hill we had just walked down.

The route was a slightly undulating mixture of grass, gravel/shale, broken and smooth tarmac, clearly marked and well marshalled with water stations provided at 2.8 and 5 miles (with paper cups). There were some lovely scenic sections and a cheeky hill at around the 3.5 mile mark. The wooded areas gave a welcome (albeit brief) relief from the sun.

I ignored the split point and continued straight on to do a second lap, receiving a cheer from the marshalls and handful of spectators. There had been a rumour at about mile two that anyone quitting after the first lap got Boo’d – surely not – but I wasn’t willing to find out. Although I was within the time limit, a third lap had never been on the agenda for me so at the second time of reaching the split, I turned left and headed up the grassy slope to the finish line. Turns out the first born had underestimated my abilities and missed me arriving back. I had already collected my medal, banana, crumpets and timing slip before she’d even managed to put her shoes back on and fold the blanket. Another mental note – find better support crew.

167 runners and walkers finished after one lap, first male being Paul Newton (Redhill Road Runners) in 32:05 and first female Laura James-Hutchinson (unattached) in 36:54.

Hats off to the 21 three lappers, especially as there was no prize, with James Caldon (Benfleet Running Club) coming in first male at 1:35:11 and Lisa Wright (South Derbyshire Road Runners) first female in 2:08:05. 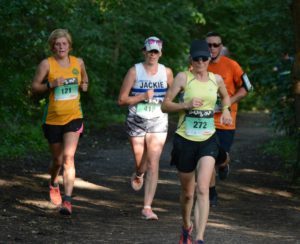