I can’t remember where I was when Paul Middlemas asked me if I wanted to run out to Edale fell race but I gave everyone’s obvious answer of ‘no’. However, as Saturday afternoon progressed with rain, rain and more rain and Sunday’s forecast was for clear skies and sunshine, that no became a definite ‘yes’. So with the race starting at 11am, the two of us set off for Edale at 6.30am, taking in Limb Valley, Houndkirk Road, Burbage, Stanage, Parkin Clough, Win Hill, Loose Hill and Mam Tor before descending into Edale at about 10.15am. Unfortunately, my watch said 19.79 miles so I had to do an extra loop of the car park in Edale!

Onto the race, so: 234 runners did a big climb, ran along the ridge, then a big descent. We all tried not to twist any ankles as the terrain on the course is a bit of an ankle twister. I turned my ankle once and jolted my back in an unseen rabbit hole but generally uneventful. It is however, a spectacular race and I would highly recommend it. I did realise the difference between ‘race pace’ and ‘ultra pace’ as, try as I might, I could not get the legs to run as fast as I wanted them to. It wasn’t too far into the race when I decided that I was going to cruise the race and not race it. Perhaps I was being over ambitious for expecting anything otherwise.

The race finishes inside the Edale show itself so we could treat ourselves to a well earned pint and watch some of the great acts/performers within the show. The race was won by Billy Cartwright of Matlock AC in 33.47. The ladies race was won by Rachael Lungren of Totley AC in 40.23, just edging out Caroline Brock who finished second lady. Well done to all the participating Striders. 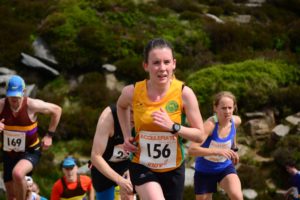