This fantastic event is one of the many ‘challenge’ events overseen by the Long Distance Walkers Association (LDWA) throughout the year.  Open to both runners and walkers it offers a choice of distances, and in this case it was 13, 20 or 27 miles.  This year three striders, Fran Cummins, Mir Jansen and myself chose the 27 mile version.

We lined up with the 150 other participants outside the Elsecar Heritage centre where we received one of the most minimalistic pre-start briefings I think I’ve ever heard.  Whilst helpfully remembering to warn us to be careful on the muddy bits, there was no mention of the massive angry bull awaiting us in one of the fields.  More of him later.

The route itself was undulating and very pretty, describing a large figure of eight and taking in the Capability Brown designed landscape of the Wentworth Estate, including some recognisable locations from the film ‘Kes’, some lovely woodland and beautiful views from its highest point at Wharnciffe Crags. Despite a very wordy and detailed route description provided by the organisers, the navigation was very tricky.  Fran, who was a long way ahead of Mir and me took a few wrong turns, but despite relying entirely on the GPS on my watch we miraculously stayed on track.

There were several checkpoints along the way all very well stocked with sweets, fruit, sandwiches and drinks.  I admit to having been quite excited by the range of sweets on display and endeavoured to try them all.  It was thus I discovered that running with a mouthful of liquorice torpedoes is a foolish idea and should only ever be attempted by experts.

Just past the halfway point, about 14 miles in, the path crossed a field containing what appeared to be a large number of cows and calves, or so we thought.  On closer inspection it was also found to contain an enormous white bull, who was stamping his right hoof and making angry sounding bull noises.  There being no obvious way around, I decided to forge on sticking closely to the dry stone wall/ barbed wire barrier to my right.  Mir followed on behind with a couple of other runners.  We all made it intact but later discovered that Fran had had to scale the barbed wire as she was charged by the herd!

There are no official results as it is not technically a race, but Fran finished in a very impressive 4 hours 46 minutes, with Mir and I coming in at 5 hours 40 minutes.  Pie and peas, a weird certificate and a sew on badge were provided at the end.  All in all a fantastic and memorable day out and I would not hesitate to recommend it (unless you have a phobia about cattle). 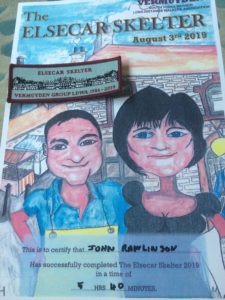