‘Athletics is the most ancient sport. A noble discipline, where the single athlete puts her/himself at stake against her/himself, against time. A continuous challenge and final goal to achieve is to improve yourself, go beyond your limits, defeat the time trial and aim at the podium.
For everyone the important thing is to try, to improve, to compete.’

Luigi Brugnaro, Mayor of Metropolitan City of Venice, 2019. (‘her’ added by me to include women athletes.)

Five years ago I discovered I had breast cancer. It was successfully treated by skilled and committed medics. A year later I tore my rotator cuff after a fall on ice which was again successfully  treated. In 2016 the meniscus in my knee tore and almost ended my running career. Surgery and a long recovery followed and in 2018 I began to run and compete again on road, trail and fell. As many runners will confirm I needed to run to keep mental and emotional health as well as physical wellbeing in balance.

As my confidence as a runner grew I looked for  new challenges. I started with a couple of British Masters races at cross country, half marathon,10K and 5K distances. The outcomes were promising so I stepped up the training, took advice from fellow athletes and looked around for a new goal.

A year ago I met coach and mentor John Rothwell. He asked whether I was a recreational or aspirational runner. Having worked my way through the recreational levels I was ready to aspire to regional and perhaps even national representation. With John’s encouragement and support I qualified to run in the Celtic Nations International cross country race in Swansea last November and to my surprise achieved an individual bronze and team gold medal for England running with former Olympians Yuko Gordon and Penny Forse.

After a few more conversations with John and coach Mick Wall, Silver Medalist in 200m in the National Track and Field Championships in Birmingham 2018, I decided to look to Europe. The European Masters Athletics Championships at Jesolo, Caorle and Eraclea in the Venice Region of Italy gave me to chance I wanted to try out my first GB vest and pit myself against the best women in age in Europe. Unlike the Celtic Nations race I did not have to qualify to run as a GB Masters athlete, merely pay the entry fee, buy the kit and get myself to the start line. As I have no experience as a track athlete I entered the 10K road race and 4K cross country race.

My first race was at Caorle on Sunday 8th September. The weather forecast mentioned heavy rain and thunderstorms. The 4K course was flat with one small mound. it was the most unlikely cross country surface I’ve run on. The main disadvantage was that it had many twists and turns so that it was difficult to get any consistent pace. A thorough recce and warm up helped with the pre race nerves. A light drizzle kept the dust and pine needles down as F55+ women of all European nations lined up.

Masters athletes wear their age group on their back so you can see who you’re competing against. German, Italian, French, Spanish and Nordic women looked very professional in their national kits and I was pretty pleased to wear my red, white and blue too. John had advised me to get to the front if I was to get the start I wanted. The gun sounded and we were off. The Swedish F65 athlete Lubov Pospeshina passed me within a few meters. I had no idea who else was ahead so I had to run my own race to the best of my ability. Less in distance than my usual parkrun I felt able to push myself and trust my spikes to keep me in the race. The Swede won Gold in 16.51mins. I was second in 17.06 and a German athlete third in 17.07. I had taken silver by 1 second. A mixture of triumph and anxiety for me as I realised how easily the race is lost and won. The German women took the team Gold with GB as Silver medallists. So in one 4K race I had achieved my first two European medals. Shortly after the other women’s and men’s races the heavens opened and the area around the stadium was flooded, forcing the throwing events and Nordic Walking to be suspended for the day. 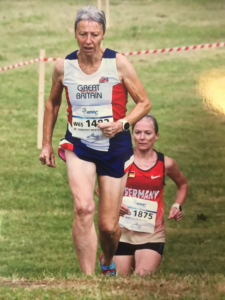 It was a week before my second race, the 10K road race in Jesolo so I had plenty of rest and recovery time plus the thrill of watching the track and field events at the main stadium. I saw some  exceptional performances, particularly in the shorter track events. Sheffield was represented by Doug Banks, Steel City Striders, in 800m, Jed Turner SRC also 800m and Tony Whitehouse, M65 From Totley AC in the half marathon.

The conditions on the second Sunday 15th September were in total contrast to the week before. As half marathon and 10K road runners registered and lined up at Jesolo for the last events before the final relays and closing ceremony the sun was searing and the welcome breezes of the previous week had gone. It was around 29˚C, far warmer than the usual summer race weather.

Well hydrated, sun creamed and again in my super GB kit I went through my paces and warm up routines. I had cycled the route 3 times in advance so knew every twist and turn, landmark, ascent and descent on the course. I was aiming for 7.5 minute mileing which would bring me in at just over 45 minutes, My PB this year at Blyth was 45.09 so that was the target. If I could push a sprint in at the end I might even set a personal record for the year. I had not taken the relentless heat sufficiently seriously. After 4K my breathing became laboured, throat dry and legs heavy. My pace began to drop and I watched helplessly as the same Swedish F65 who beat me in the Cross Country eased past looking comfortable. Could I hold off the Italian, Spanish and Finnish athletes in the second half? A very promising 7.20m average pace in the first half was now being blown away as the heat took its toll. The fifth mile was a disappointing 8.02mins and it was only because I knew the finish was within sight that I was able to push through the pain to record 7.56mpm as the finish gantry came into sight. Despite all my aspirations, expectations and dreams I recorded a disappointing 47.17 minutes.

Assuming I had blown it I wandered off, dejected, looking for water and shade only to discover some time later that the extreme conditions had affected the other runners too. The F65 winner recorded 46.20mins giving her a well deserved gold medal but the third F65 to cross the line, the Italian Annamaria Galbani was almost three minutes behind in 50.12. I had secured another silver medal against all the odds.

Standing on the podium at all, let alone twice was something I had barely believed possible. To have brought home three silver medals at my first International Track and Field event, 5 years after  cancer treatment shows that if we want to achieve and are willing to put the work in then anything is possible.

My main learning from the experience is that I am inclined to set off too fast. Had I set a more manageable pace at the beginning I might have been more consistent over the whole race. Running a 10K at 5K pace is not wise, particularly in very warm conditions.

For anyone thinking of aiming at a new level in your running, check out Northern Masters and British Masters websites. It sounds a bit grand but a ‘Master’ is someone 35+ years old. Competition is regular and includes Stadia, Non-Stadia and Indoor athletics. The next European Indoor competition is in Braga, Portugal next March. Although it is mostly indoor, it includes cross country and a half marathon. Madeira hosts the Non-Stadia events of road running and walking in early April and the World Masters Games are in Toronto summer 2020.

My appreciation and thanks to:
John Rothwell for coaching, mentoring, encouragement and support and making me believe it was posssible.
Mick Wall for mentoring and support.
Stuart Hale and Accelerate Community for training and support. 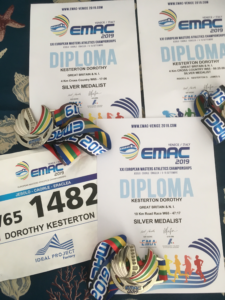 For all the EMAC results – here.