Race Date Thursday 27 June 2019
Flying in under the radar this event, hosted by City of Sheffield and Dearne AC, clashed with the usual Thursday evening track session at Woodbourn Road. These events don’t happen by themselves and deserve support so instead of the scheduled 600’s the group were encouraged to enter the 3000m race with eight of them taking up the challenge with Ben Jones also having a go at this non-championship distance.

Matt Connell appeared confident as he blasted off with a 72 second first lap (equivalent to a 15 minute 5000m) but eventually returned to the pack as Ben Jones took control to win in 9:44.6. After the race, coach Mike Theobald admonished the group accusing them of failing to get out of the comfort zone and “not drinking the full pint”. Even so, Caroline Brock claimed another club record in the vet category; following her birthday last week Caroline said that she was “really looking forward to a new age category, but now I just feel old”. Caroline is still very competitive as a senior so she would do well to forget about veteran status for the time being. 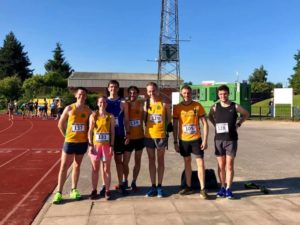 Some of the Thursday track group who took part in the 3000m. There’s another meeting on 10 July and again on 15 August so they have the opportunity to gain some more experience and hopefully to redeem themselves.

About an hour after the 3000m there was an 800m event with three Striders venturing into the unknown with Ben perhaps suffering from his earlier foray into the 3000m. 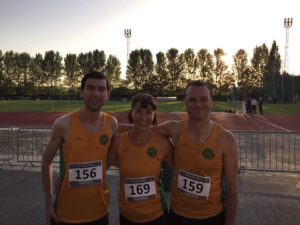 Conor O’Boyle, Kate Scott and Ben Jones who took on the 800m. If you want to find out what it’s like to have your legs turn to jelly then this is the event for you.

Some minor issues with the Official Results. Tom couldn’t get his usual results team out and sorting out results from so many different races and age groups can be quite challenging.