Good advice to athletes is to build a suite of personal bests over a range of events to find out what you’re really good at so you don’t get to your fifties only to realise that you should have been running the 800m all your life. Inspired by Andy Davies who organised three excellent club meetings earlier in the year, many Striders have continued their efforts on the track at some of the open meetings regularly held across the region. This version of Run Jump Throw, hosted by City of Sheffield AC, was their best attended yet with large fields and a warm sunny evening to promote good performances. Track events are great fun  as there’s always something going on for the spectator and tonight, with something that you won’t see on the Diamond League, a hammer competition which attracted throwers from far and wide. If you want to understand why coaches go on about track discipline and health and safety then watch these guys and gals hurl lumps of metal into the air with amazing control and skill

Man of the match must be Conor O’Boyle who ran 2:04:58 for the 800m (electric timing) and just over a second outside the club record of 2:03.5 set way back in 1988; it’s a shame that Conor is moving on this summer and we wish him well with his career. There was also an eagerly anticipated but sadly unsuccessful attempt on the club 4x400m record of 3:53.0 which has stood since 1987; not that many Strider’s team have run the 4x400m since. Caroline Brock also broke her own club 3000m record but she’s beginning to get a bit like Sergey Bubka these days. 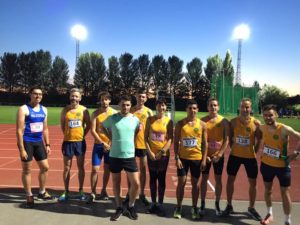 Kate Scott with some of the boys